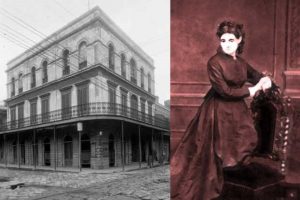 In the early years of the 19th century there lived a monster in the city of New Orleans. This was no ordinary monster, a highborne wife of a surgeon whose greatest passion was tearing loose the fingernails of her victims and clawing out their eyes for pure amusement.

At times her creativity would get the better of her and she would experiment with artful patterns by carving the flesh from her victim’s bodies, but this article isn’t about the monster Delphine LaLaurie. This article is about the house where she tortured her final slaves. Welcome to the LaLaurie Mansion…

At the age of 41 and after a series of failed marriages Delphine wedded a young man half her age named Leonard Louis Nicolas LaLaurie.

A combination of that age difference and Delphine LaLaurie’s significant wealth afforded her a very dominant position in the relationship, so much so that the purchase and building of the house at 1140 Royal Street was solely her endeavor and Leonard’s only part would be to live there.

Delphine was well known for frequently purchasing new slaves and despite that Louisiana was under Code Noir preventing the cruelty of slaves, not much thought was given as to what had become of her previous slaves.

1140 Royal Street, the LaLaurie Mansion had space only to house seven slaves at any given time, but this was just the slaves’ quarters and not if you were to count the cages in the attic.

On the main floors of the LaLaurie Mansion a very different picture was painted, one far from reality. Delphine’s home was a centre of high culture and often a meeting place of socialites as she was known for her parties throughout the state.

However, the mansion originally built to have three floors, and for the most part having only three floors visible from street level, had had a 4th shack like floor added on the roof. This was the infamous “attic” and Delphine LaLaurie’s torture chamber.

Only two years living in the 1140 Royal Street mansion Delphine was beginning to attract the attention of her neighbors who had a view of the upper floors from their own windows. It was in the second year that a neighbor watched Delphine chase a young girl up the stairs to the roof whip in hand.

To the neighbors’ horror, the young slave girl upon reaching the roof threw herself to her death rather than face madam LaLaurie.

This would be the first time that Delphine’s brutality was brought to light with the authorities and might have been the end if the “attic” weren’t well hidden above the actual floors of the home. The detectives sent to the home left empty-handed.

Whether or not the presence of the visiting detectives incited the slaves we’ll never know, but shortly after the cook who was often kept chained to the stove lit the house ablaze. Seeing the fire the community came to Madam LaLaurie’s aid, but when they got to the slave quarters, even as the building burnt, they were refused the keys.

This did not stop them. The door was smashed in and there they found several slaves alive, but horribly mutilated. The cook also survived the fire and was found by inspectors chained by the ankle to the stove. She confessed to lighting the blaze, but also stated that she had done it as a suicide attempt for fear of being taken to “the upper room”.

Finally the secret of the rooftop torture chamber was discovered, but the investigators could never have imagined what they were about to see….

According to author Jeanne DeLavigne and based on newspapers of the time what they found was “male slaves, stark naked, chained to the wall, their eyes gouged out, their fingernails pulled off by the roots; others had their joints skinned and festering, great holes in their buttocks where the flesh had been sliced away, their ears hanging by shreds, their lips sewn together … Intestines were pulled out and knotted around naked waists. There were holes in skulls, where a rough stick had been inserted to stir the brains.”

Under pursuit by an angry mob Delphine LaLaurie escaped to France with her family where she would spend the rest of her days, but her house of horrors would remain.

1140 Royal Street would pass from owner to owner over the next two hundred years, eventually being owned by Nicholas Cage until he lost it in foreclosure in 2009. Cage would joke about the property from time to time saying “You know, other people have beachfront property; I have ghost front property”, but in truth the actor was terrified of it.

During an interview on the Late Show, David Letterman asked the actor if his family stayed in the home when in New Orleans to which Cage responded very seriously that no one in his family has ever had the nerve to spend the night in the house.

What lives within the walls of the LaLaurie Mansion nobody can say with certainty other than that there is an evil that emanates from it. Locals cross the street as they pass, they try not to look at it, but they can feel it.

Tourists on “ghost tours” often say that just standing outside the building was all they needed. This is one haunted house that is more often referred to as evil than as haunted.

Today the LaLaurie Mansion is owned by an anonymous buyer who purchased the property for three and a half million dollars in 2009, but since that day it has been kept locked, vacant, and well-guarded.