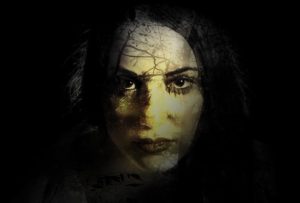 Deep within the pristine foothills of the Ouachita Mountains in Southwestern Arkansas, lies a ghost story that is rooted as deep within the culture there as the thousands of pine trees that line the landscape.

The story is set in the small college town of Arkadelphia, which has a population of about 10,000, and is the epitome of small town USA. Unlike most college towns around the country, Arkadelphia plays host to not one, but two highly acclaimed schools that have been at odds with each other for many years.

Henderson State University, and Ouachita Baptist University, are the two schools that call Arkadelphia home. In the early days of their existence, these two medium sized universities had very large differences when it came to religion and values. It was that difference which sparked the ghost story known as The Lady in Black.

The story begins in the 1920s when a young man named Joshua met the love of his life, Jane. Jane was a student at Ouachita, and Joshua, being from Henderson, never gave a second thought to dating her. His friends however were not as understanding, because they began to ostracize him and threatened to never speak to him again if he didn’t end his relationship with Jane.

According to Mary Jo Mann, a Henderson graduate and local historian, the reason Joshua was given such a hard time by his friends was probably because Jane was highly religious and wasn’t the outgoing type.

“Going to Ouachita in those days meant no parties and hardly any dating,” Mann said. “They really never had a chance from the start, because no one from Henderson would ever think about seeing someone from Ouachita in those days, and if they did, they could expect to feel the heat from their friends.”

Jane and Joshua managed to hold their love together, until the day came when Joshua finally gave in to his friends’ hazing. He broke up with Jane right before the annual homecoming dance at Henderson, which made the news even more devastating for her.

She went back to her dorm room at Ouachita to put on a black dress and veil, because she felt that nothing was worth living for if she couldn’t have Joshua. She then began walking to one of the many cliffs that line the Ouachita River, where she plunged to her death moments later.

From that time forward on homecoming night at Henderson, the girl that has become known as The Lady in Black has haunted the campus searching for the ones who made Joshua break up with her.

This ghost story is still very predominant in the Henderson community today, as Mann can attest.

“It really does give me chill bumps when someone mentions her.” Mann said. “There isn’t a person on the Henderson campus that doesn’t know something about the story.”

Each year Mann tells the story of The Lady in Black at the Pine Tree speech that welcomes incoming freshman to the Henderson campus.

“When I first heard the story it gave me goose bumps,” said Angela Welch, a junior at Henderson. “The way she — Mann — tells the story made me believe that the ghost is real.”

Welch also added that when she and a group of friends were walking back to the girls dorm around midnight on homecoming of last year, she saw a faint figure dressed in black exiting the building.

“I couldn’t tell what it was at first, then someone screamed out that it was the Lady in Black,” Welch said. “I just screamed and ran into my dorm room. I really believe it was her because you could see a veil of all black and there was a kind of glow around her body.”

Mann said that the sightings are rare because the timing of the ghost is only on one night a year: homecoming. “I have never had the chance to see her myself,” Mann said. “But I feel like I will have my chance one day.

With Mann’s knowledge of the ghost and unique story telling ability, the story has become known not just in the community of Arkadelphia, but state wide as well.

Numerous news organizations throughout the state have covered The Lady in Black, the most widely known report being in the 1980’s by Chuck Dovish, from KTHV Channel 11 in Little Rock, for his weekly special Travling Arkansas.

“With Mary Jo Mann’s help, we were able to go out to the cliff where she supposedly jumped,” Dovish said. “It was really an odd feeling to be there because the cliff was so steep and you could almost feel her presence. We did a short reenactment for the show, and had to get special permission from Ouachita to even get out there to the site.”

Officials at Ouachita would not comment on the validity of The Lady in Black ghost, stating that she is merely a rumor. And the cliff where she is said to have jumped off — which is owned by Ouachita — has been sealed off preventing anyone from entering it without a university escort.

“There are many people who say she’s not real,” Mann said. “But I have never seen one of those people roaming around the Henderson campus on homecoming night trying to find out if they can see her. And I can’t say as I would either.”