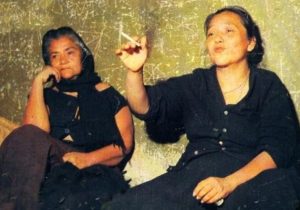 Delfina and María de Jesús González Valenzuela, (known as “Las Poquianchis”) were two sisters from the Mexican state of Guanajuato, located some 200 miles north of Mexico City. During the 1950s through the mid 1960s, the sisters ran Rancho El Ángel, called the “bordello from hell”.

The police picked up a woman named Josefina Gutiérrez, a procuress, on suspicion of kidnapping young girls in the Guanajuato area, and during questioning, she implicated the two sisters.

Police officers searched the sisters’ property and found the bodies of 11 men, 80 women and several fetuses, a total of over 91 bodies. Investigations revealed that they would prowl the countryside, and the nearby ranches in Guanajuato or venture into rural Jalisco and Michoacan and look for the prettiest young girls.

They would offer them employment in as maids or waitresses. The poverty stricken local girls, with dreams of life in the big city and money, happily accepted. Other times the Gonzalez sisters, with the help of an Army Captain/Henchman and Delfina’s lover, Hermengildo Zuniga, would simply snatch the young girls, never to be seen again.

They would recruit girls through help-wanted ads stating the girls would become maids for the two sisters. The women were then forced into prostitution, many of whom were force fed heroin or cocaine.

Then when the prostitutes became too ill, got an std, lost their looks, or stopped pleasing the customers, they killed them, often they would be locked in a room, starved to death or the other girls would be forced to beat them to death with sticks and heavy logs.

They would also kill customers who showed up with large amounts of cash. When asked for an explanation for the deaths, one of the sisters reportedly said, “The food didn’t agree with them.”

In prison, Delfina, the eldest of the sisters went mad, fearing she would be murdered in prison and she died following an accident on October 17th 1968, While she screamed and ranted, workers doing repair work above her cell in Irapuato jail, looked down to catch a glimpse of the notorious woman and accidentally dropped a bucket of cement on her head, killing her.

Maria de Jesus González Valenzuela, the youngest of the sisters, finished her sentence and dropped out of sight after her release, the only one of the four to be released.

Maria Luisa Gonzalez Valenzuela died alone in her cell at Irapuato jail on November 19, 1984. Her body, already being eaten by rats, was discovered a day later, her sister Carmen had already died in prison from cancer. The four sisters were the subject of the 1977 book Las Muertas by Mexican author Jorge Ibargüengoitia.