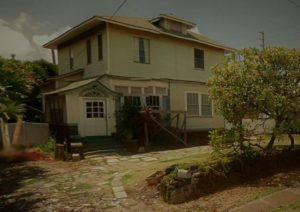 Hawaii is known for its beaches, beautiful scenery, and friendly natives…but did you know it’s also one of America’s most haunted states? There are countless stories telling of ghosts and demons, including a particularly nasty one located at the famous Kaimuki House in Honolulu, Hawaii.

Many families have moved or vacationed there over the years, only to be thrown out by strange and usually dangerous occurrences. On one occasion, a young couple bought the property and moved in. Within a short time, people next door started hearing loud bangs and crashes.

Thinking it was a domestic violence incident, the neighbors called the police. But when the police arrived to investigate, nobody could even begin to explain what had been happening. All the couple could gather was that it felt as if they were “being attacked by something they could not even see.”

The creature said to reside in the Kaimuki house is called a “Kasha”, a man-eating ghost from Japanese folklore. Other interpretations of this monster include a ghoul who lives around crematoriums and feeds on the dead, and a cat-like demon from the sky who steals away bodies.

However, all three versions have one thing in common: its insatiable hunger for blood and corpses.

Sometime during the summer of 1942, the police were called to the house again for another incident. A woman had been repeatedly screaming, “She’s trying to kill my children!” which they heard upon pulling up to the front of the house.

After entering, the police could only stare for over an hour as the three kids were hurled across the room, slapped, and levitated…all by some invisible force.

This event (which was published in the local newspaper) inspired Arthur McDougal to write a fictional, much more violent account. In his story, the children were literally ripped apart by the entity right before the mother’s eyes.

In the spring of 1977, another young couple moved into the Kaimuki House, oblivious to its creepy history. Nothing seemed to be out of the ordinary until they returned from having a traditional Hawaiian Mother’s Day dinner, and retired for the night at about 8:00 pm.

Around midnight, the bedroom became increasingly chilly, although there was no wind blowing through the curtains. Having woken up, the wife saw a white figure of a large woman standing at the foot of their bed.

However, there was nothing visible below her waist, and she appeared to have no arms. Once the wife got up to use the bathroom, the figure disappeared. A little shaken by these events, the couple made an appointment to see their reverend.

He told them that their visitor was simply a wandering, harmless spirit who needed a little help moving on. He then advised them to put some food and water on a table every night in the general area where they had seen the ghost, and toss it out the window at dusk as an offering. After the couple repeated this for a whole week, the woman never appeared again.

A possible explanation for these spooky happenings may be the two murders allegedly committed in the house. The first one is a twist on the story mentioned before, about the children being brutally killed.

However, the case states that it was actually a father who murdered his two kids, along with his wife. He buried his son and wife in the backyard, but the daughter’s body was never found. The second event tells of a lesbian couple, where one of the women became involved with a man.

After discovering his girlfriend’s secret, the man proceeded to kill her, the other woman, and himself…all within the walls of the Kaimuki house.

Today, villagers still tell stories of the terrifying occurrences, and many books and newspaper articles have been written detailing the haunts.