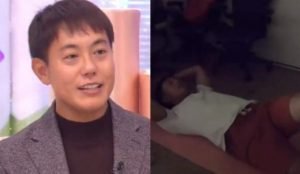 Daisuke Hori, a 36-year-old resident of Japan, has devoted the last 12 years of his life to training not only the body, but also the mind.

Due to this, the man learned to sleep for only half an hour a day. The Japanese said that he reduced his sleep rate and did not notice any side effects that could result from lack of sleep, reports Odditycentral.

Daisuke always believed that 16 hours of activity was not enough to complete all the necessary tasks. He began to conduct various experiments with his sleep schedule and after just a couple of years he began to sleep literally 30 minutes a day.

At the same time, the man remained quite energetic and did not experience any health problems.

Many did not believe that the Japanese lived this way and practically did not sleep. The producers of the show, popular in Japan, offered him to shoot his lifestyle for three days.

Daisuke did not refuse this offer and spent three days under the close supervision of cameras and film crew. All this time he slept for half an hour or even a little less.

The rest of the time the man devoted himself to work, exercising in the gym, and having fun with friends. It is worth noting that his friends also sleep very little, so they often go for walks at night.

A disc-shaped UFO flew demonstratively during a news release