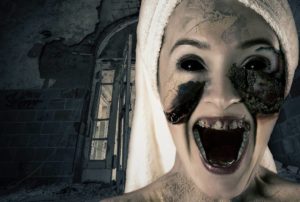 This strange but true and tragic story comes from a tiny area in Brazil called Jaboticabal, located just North of San Paulo. It is the story of an outbreak of poltergeist activity involving an 11-year-old girl and the violent attack on her and others by unseen forces. The case has been investigated and examined for many years and appears to be a real case of extreme poltergeist activity.

Marie Jose Ferreira was a normal child in every way until the strange events suddenly began in December of 1965. The family was in their home one evening when a brick seemed to materialize out of thin air and fly about the room. The sight of the flying bricks, some weighing as much as 8 pounds, soon became common in the Ferreira home as well as an ever-increasing array of paranormal phenomena.

As the damage to household items and injuries to humans mounted, the family decided to contact their Priest and ask for help with what they believed was an evil force infesting the house. The Priest performed an exorcism in the Ferreira home but as is often the result when dealing with poltergeist, the ritual failed to rid the home of the entity and seemed to make the situation worse.

By this time it was clear that Maria Jose was taking the brunt of the paranormal attack. She had been hit by bricks, slapped, bitten and stabbed by dozens of flying sewing needles. With the Ferreiras not knowing what to do, a family friend intervened and contacted local Spiritist Joao Volpe. It was Volpe, after speaking with the family, that first recognized that what was happening was not caused by an evil entity but was classic poltergeist activity.

Maria soon moved into Volpe’s house where he could study her further. Volpe learned that Maria had many invisible friends, most of them friendly. He also said that she was a natural medium and able to communicate with spirits. Despite his efforts, Volpe was not able to help Maria and when her cloths caught on fire on two separate occasions, he called Medium Chico Xavier of the Chico Xavier Spiritist Center in Uberaba, Brazil.

Arrangements were made and soon Maria was sent to the Spiritist Center. Chico Xavier made some incredible claims after examining the young girl. He said that in a past life Maria had been an evil witch who was responsible for the deaths of many through the use of black magic.

He stated the unseen force that had terrorized Maria for months was a vengeful spirit that had been one of Maria’s victims in a past life. Eventually, after countless hours of praying, Xavier proclaimed that he had succeeded in ridding Maria of the spirit or spirits that surrounded her. After months away Maria could now return home.

The homecoming did not turn out to be a happy one. It quickly became obvious that nothing had changed as the poltergeist phenomena began again. After being home for just 3 days a depressed Maria was found dead in her room. The autopsy showed that Maria Jose Ferreira died after consuming a pesticide laced drink and her death ruled a suicide. With the death of Maria no further poltergeist activity was reported by the Ferreira family.