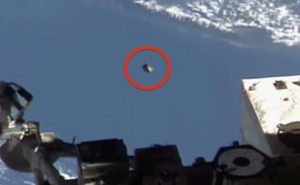 A popular ufologist Scott Waring made another find. He presented to the public a video in which UFO was visible for 22 minutes. The video was recorded by the camera on the ISS.

A strange object for a long time at the same speed moved with a space station.

At first, the ufologist thought that he was dealing with a research capsule or satellite, but after a while such thoughts were discarded, because the object quickly increased its speed and sped away.

You can see the speed up video below:

Capsules usually slow down and go into low orbit, but in this case, we do not observe this. According to Scott, UFO looks like an ice cream cone.

It is difficult to say what the ISS camera recorded. Perhaps, in fact, a UFO flew up to the ISS.