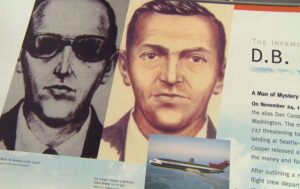 On November 24, 1971 a man named D.B. Cooper who was wearing a suit and sunglasses, hijacked a Boeing 727 aircraft in the airspace between Portland, Oregon, and Seattle, Washington. After getting on the plane, he ordered whisky and lit a cigarette before passing a flight attendant a note that read: ‘I HAVE A BOMB IN MY BRIEFCASE…’

Cooper then told the flight attendant to write down his demands, which includes $200,000 in cash in a knapsack, as well as two back and two front parachutes. The FBI agreed to the swap and the plane took off again under Cooper’s orders to fly towards Mexico at an altitude of under 10,000 feet.

Somewhere over the lower Cascade mountains in southwestern Washington, Cooper stepped out of the plane with a parachute strapped to his back. He was never seen again. The case remains the only unsolved air piracy in American aviation history.

Actually the name D.B. Cooper was nothing more than a mistake. The suspect’s name is Dan Cooper. The FBI’s search for Cooper included checking the records of known felons named Dan Cooper, in case the hijacker had been careless enough to use his own name.

They sent an agent to Portland, Oregon, to check a man named D.B. Cooper. A reporter for a news service heard the FBI had been there and asked the clerk, who told him they were investigating “D.B. Cooper.” The reporter used the name in his story, and even though the Portland man was cleared, the name D.B. Cooper stuck with the hijacker.

The event began on the day before Thanksgiving, November 24, 1971. A line of people formed at the Northwest Orient Airlines ticket counter, ready to purchase tickets for Flight 305. The flight had originated in Washington DC that morning and had made stops in Minnesota, Montana, and Washington. Soon it would land in Portland for its last flight of the day, a short hop to Seattle, Washington.

A man waited in line to purchase his $20 ticket to Seattle. The man was neatly dressed in a dark suit, white shirt, and a black tie with a mother-of-pearl tie clip.

Based on the FBI investigator report, the two flight attendants who spent most time with the suspect on the plane were interviewed separately the same night in separate cities and gave nearly identical description. They both said he was about 1.78 m to 1.8 m, with weights approximately 77 to 82 kg, in his mid-40s, with brown eyes. People on the ground who came into contact with him also gave very similar descriptions.

He wore loafers and a black raincoat. He probably looked like any other businessman traveling through an airport, and no one thought twice about him. He paid for his ticket in cash and gave his name as Dan Cooper.

He was not required to show photo identification. He then boarded the airplane and found his seat in Row 18, the last row on the plane. The plane itself was not very full, despite the upcoming holiday, with a total of only 37 passengers. The crew anticipated a quick and uneventful flight.

Dan Cooper asked for a drink (a whiskey and 7-Up) and then took out a pack of Raleigh brand cigarettes. He took one out and lit it, slowly exhaling cigarette smoke into the cabin.

Flight attendant named Florence Schaffner brought Cooper his drink. As the plane began taxiing down the runway, he paid for it and also handed her a note. Schaffner sat beside him for takeoff. She was used to having passengers flirt with her, so she put the note in her purse without even reading it. And then Cooper leaned toward her and whispered, “Miss, you’d better look at that note. I have a bomb.”

The note was printed in neat, all-capital letters with a felt pen. It read, approximately, “I HAVE A BOMB IN MY BRIEFCASE. I WILL USE IT IF NECESSARY. I WANT YOU TO SIT NEXT TO ME. YOU ARE BEING HIJACKED.” Cooper opened his briefcase and motioned for Schaffner to look inside. 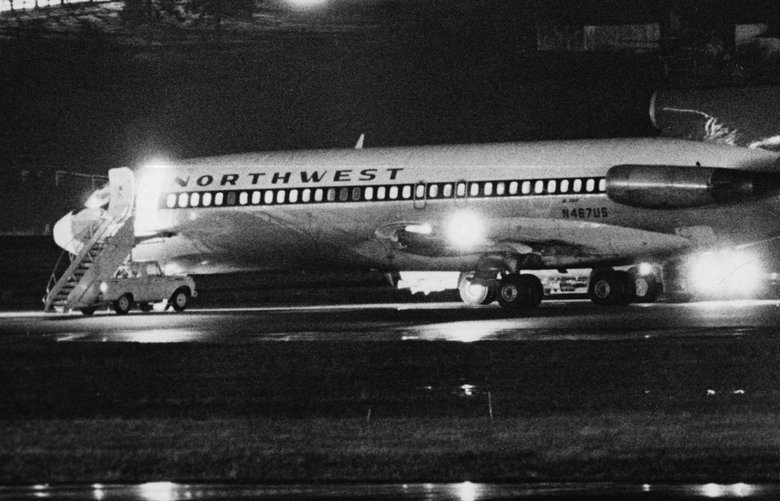 “I was scared to death and pretty nervous,” she later said, “but I do remember seeing eight red cylinders (“four on top of four”) attached to wires coated with red insulation, and a large cylindrical battery.” After closing the briefcase, he dictated his demands: $200,000 in “negotiable American currency”; four parachutes (two primary and two reserve); and a fuel truck standing by in Seattle to refuel the aircraft upon arrival.

Schaffner conveyed Cooper’s instructions to the cockpit; when she returned, he was wearing dark sunglasses. When Schaffner took the note to the captain, she also alerting other flight attendant, Tina Mucklow to sit beside him to keep an eye on Cooper and to try to keep the other passengers safe.

Meanwhile, the captain, William Scott, read the note and contacted Northwest Orient officials on the radio. After telling them of the situation, he put the plane into a holding pattern, circling above Seattle for more than an hour while officials on the ground contacted federal authorities and scurried to collect the money from several area banks.

Officials decided to give Cooper the money as 10,000 $20 bills, many with serial numbers beginning with the letter “L” indicating issuance by the Federal Reserve Bank of San Francisco, most carrying a “Series 1969-C” designation, hoping that the bulk of that much cash might slow down his escape.

The money was also photographed before it was given to Cooper so that officials could trace the serial number if it was spent in the future. While the parachutes were collected from McChord Air Force Base (AFB) nearby.

Captain Scott did not want the other passenger Flight 305 to panic, so he made excuses about waiting for a runway to be cleared before they could land. Finally, at 5:24 p.m., the air traffic controllers radioed Scott that everything was ready and he could land. When the plane touched down, it taxied to an area brightly lit by floodlights, rather than to the terminal gate as usual. Cooper demanded that the interior cabin lights be extinguished, in case there were police snipers outside ready to target him.

Once the plane had landed and rolling staircase was brought, Mucklow made several trips up and down the staircase, meeting the courier who had the $200,000. Mucklow later described the bag holding the money as “a soft, white, cloth laundry bag,” and added that it was open at the top and had no drawstrings to close it. She brought the parachutes on board also and showed everything to Cooper for his approval. 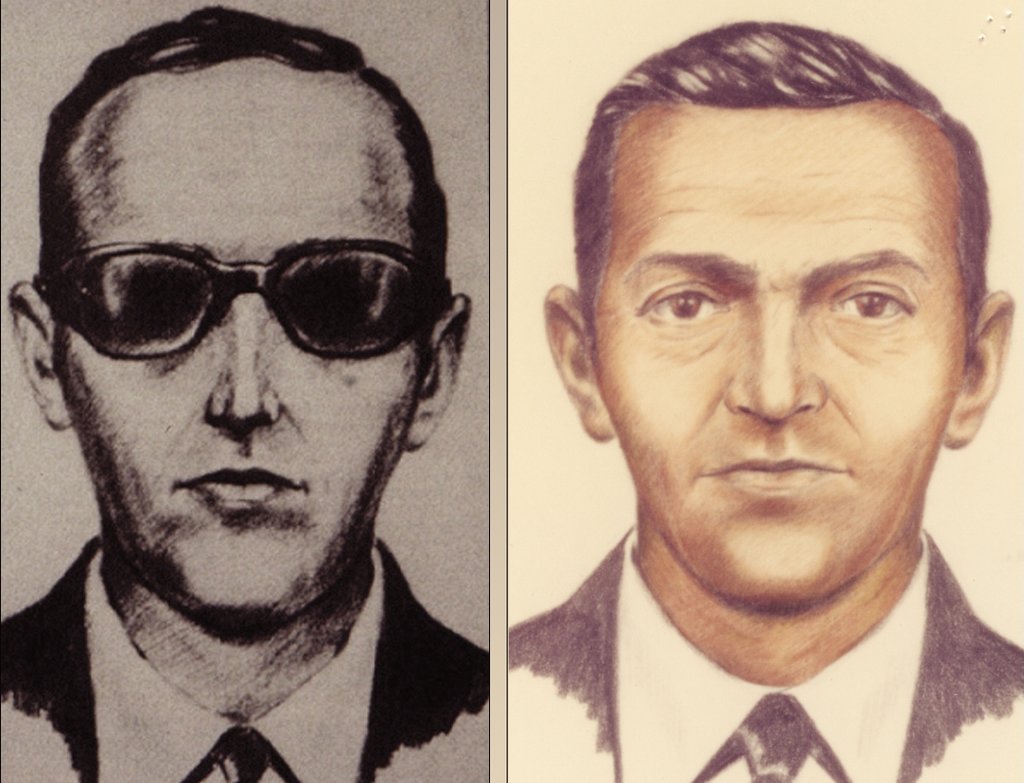 Cooper then allowed the 36 passengers, Schaffner, and another flight attendant to leave the plane in Seattle. Captain Scott later remarked, “Everything seemed to go nicely as long as we went along with the hijacker’s demands.” Neither he nor any other crew member attempted to stop the hijacking. Instead, they followed the direction of the Northwest Orient officials on the ground and complied with Cooper’s demands.

As the plane finished refueling, Cooper demanded that they fly him to Mexico. The captain informed him the trip would require another refueling stop in Reno, Nevada, which Cooper did not comment on. He did not even request a specific flight route.

At approximately 7:40 pm the 727 took off with only Cooper, pilot Scott, flight attendant Mucklow, copilot Rataczak, and flight engineer H. E. Anderson aboard. Two F-106 fighter aircraft scrambled from nearby McChord Air Force Base followed behind the airliner, one above it and one below, out of Cooper’s view.

After takeoff Cooper told Mucklow to join the rest of the crew in the cockpit and remain there with the door closed. As she complied, Mucklow observed Cooper tying something around his waist. At approximately 8:00 pm a warning light flashed in the cockpit, indicating that the aft airstair apparatus had been activated. The crew soon noticed a subjective change of air pressure, indicating that the aft door was open.

At approximately 8:13 pm the aircraft’s tail section sustained a sudden upward movement, significant enough to require trimming to bring the plane back to level flight. At approximately 10:15 pm Scott and Rataczak landed the 727, with the aft airstair still deployed, at Reno Airport. FBI agents, state troopers, sheriff’s deputies, and Reno police surrounded the jet, as it had not yet been determined with certainty that Cooper was no longer aboard; but an armed search quickly confirmed that he was gone.

Over the past four decades. There were more than 1,000 possible suspects considered. Several people even claimed to be Cooper at times, but were dismissed on the basis of physical descriptions, parachuting experience and, later, by DNA evidence recovered in 2001 from the cheap, clip-on tie the skyjacker left on the plane.

Many believe that Cooper was Richard McCoy, a Vietnam War veteran, experienced parachutist and BYU political science student who staged a similar hijacking several months later. But the FBI has said that McCoy – who was killed in a shoot-out with law enforcement officers after a prison break in 1974 – simply didn’t fit the description of Cooper provided by two flight attendants.

The FBI reopened the case in 2008. And in the early year of 2011, the agency believed it finally had the mysterious fugitive in its sights, when a woman claimed her uncle was the missing fugitive.

Burdened by guilt over her knowledge surrounding the case, Marla Cooper came forward, claiming she had a 40-year-old family secret protecting her uncle, a man named Lynn Doyle Cooper. Marla Cooper also provided investigators with a photograph of L.D. and a guitar strap that he owned for fingerprint testing. In addition, Marla Cooper said that her uncle was fixated on a comic book character named ‘Dan Cooper,’ the name the skyjacker gave the airline before boarding.

On August 3 the Seattle Post-Intelligencer reported that no fingerprints had been found on the guitar strap. On August 9 Special Agent Fred Gutt disclosed that L.D. Cooper’s DNA did not match the partial DNA profile obtained from the hijacker’s tie; but he acknowledged that the FBI cannot be certain that the hijacker was the source of the organic material obtained from the tie.

“The tie had two small DNA samples, and one large sample lifted off in 2000–2001,” he said. “It’s difficult to draw firm conclusions from these samples.” He added that the Bureau “(has not) come up with anything that is inconsistent with (Marla Cooper’s) story”, and will continue its investigation, with a focus on locating a sample of L.D. Cooper’s fingerprints.