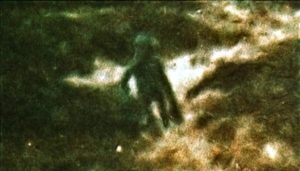 The case of the Ilkley Moor alien is one of the most debatable cases of alien abduction ever recorded in the United Kingdom because of the concerns surrounding the event.

At odds is the wide-spread unbelief in alien abductions and the two very damning facts purporting it: the Ilkley Moor abductee was a police officer, expected to be an expert eyewitness, and the photograph of what he claims is the entity he encountered.

Police officer Alan Godfrey stated that he came across the being while crossing the Moor, in the county of Yorkshire on the morning of December 1rst, 1987. He described the being as small, humanoid and green.

He seemed to have surprised the creature, for it took off running before halting at a safe distance and perhaps signaling him by bending it’s right arm and raising it. Godfrey was carrying a camera and snapped a photo of the being, which seemed to have caused it to run off again, this time behind a large rock formation.

Godfrey gave chase, and as he rounded the rock formation he stopped dead in his tracks amazed at what was before him. A large gleeming silver domed metallic disc shaped craft stood in the clearing before him, and in an instant it shot off at incredible speed into the sky.

If this story wasnt strange enough already, it was about to become more so soon. Godfrey was unable to account for two hours after the encounter, a classic sign of what is known as missing time.

Secondly, the photograph of the alien was badly blurred, this is often a tactic hoaxers will use when presenting their evidence. Yet both the photo (pictured right) and the negatives were examined by Kodak Film, which subsequently declared that the images had not been tampered with. Also, the officer noticed that his compass had switched polarity, it now pointed south instead of north. 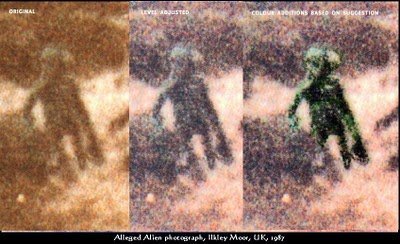 The compass was examined by the University of Manchester’s Institute of Science and Technology. Their conclusion: there were only two ways that this could have happened. Either the compass was inside a very strong magnetic field from a magnet, or had been subjected to a rapidly applied magnetic field or “pulsed” magnetic field generated by enormous amounts of electricity.

As for the second possibility, I can find no data on what or where that type of enviornment might exist, but I gather the University thought it a very low probability. For the first it was determined what kind of magnet could cause that type of effect, however the only models of it were made in Japan and were not commercially available at the time of the encounter.

Alan was not having an easy time of it either, he was worried about the missing two hours and was having nightmares that seemed to be connected to his strange meeting.

Godfrey decided to under go hypnotic regression to try and recount the missing time. At this point I would like to point out that skeptics will very often use this type of testimony to debunk an abduction claim for a variety of reasons.

Yet this same type of testimony has been used as proof and has sent people to prison. Under hypnosis he was able to recount now that when he had come upon the silver craft in the clearing it had levitated him up inside of it.

He described his captors as being about four feet tall “with big pointed ears and large black eyes….with three big fingers, like sausages.” After apparently being examined by some type of “illuminating device” Godfrey was shown harrowing images of the earths enviornmental destruction.

He was also shown another series of images which he absolutely refused to discuss, saying that he’d been sworn to secrecy.