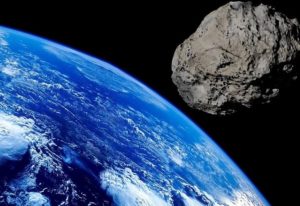 At the end of December, a large asteroid is heading towards Earth, which, in the event of a collision, will cause destruction much greater than an atomic bomb.

Astronomers reassure that the asteroid is unlikely to crash into the planet, it is expected that it will pass by it at a distance of more than 4.5 million kilometers. For comparison, the distance between the Earth and the Moon is about 384,000 km. – about a twelfth of this distance.

But the most interesting thing is that asteroid 2018 AH has already flown by Earth before – and at a much closer distance.

In 2018, it flew past the planet at a distance of 296,758 km, which is three quarters of the distance from the Earth to the Moon. It went unnoticed due to its dimness, and therefore scientists did not notice its approach.

Do not forget that there is evidence that the speed of the cosmic stone can change quite significantly, which means that the predicted path can change, and not for the better for us.

2018 AH is a sub-kilometer asteroid, classified as near-Earth object of the Apollo group, approximately 100 m (300 ft) in diameter. It was first observed on 4 January 2018, by the Asteroid Terrestrial-impact Last Alert System (ATLAS) on Mauna Loa and quickly followed-up by many other surveys, with precovery observations found from Pan-STARRS and PTF from the day previous.