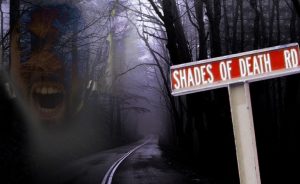 There are some real places in this world where everything just lines up for the perfect horror movie.

A twisting narrow road through dense forest with an utterly creepy name haunted by the angry spirits of lynched highwaymen; add to that a creepy lake with a creepy abandoned cabin, numerous murders including beheadings and a large number of wandering vicious wild animals, and you’ve got yourself one hell of a movie; except its real. Welcome to Shades of Death Road…

Prior to the 1920s Shades of Death Road was a hotspot for a band of highwaymen that lived on the banks of the nearby lake. In the years that they hunted the roadside for weary travelers more than twenty people, many of them whole families died at their hands.

What pushed the townspeople over the edge we’ll never know, but one evening a lynch mob made its way to the lake and massacred the band of highwaymen. Their mutilated bodies were dragged back to Shades of Death Road and hung from trees as a warning.

From 1920 to the late 1930s, the road attracted a number of other murders. First, there was the sighting of a man being robbed and beaten to death on the roadside. It was witnessed by a family as they drove by on Shades of Death Road but by the time the police arrived both the robber and the victims body were gone leaving only a bloody pool where the attack had taken place.

Following that, a local woman living on the outskirts of Allamuchy NJ murdered her husband just south of the i80 where Shades of Death Road approaches the highwaymen’s lake. Her motives for the murder have never been explained, neither was her reasoning for decapitating the corpse, and burying the head and body on separate sides of Shades of Death Road.

Lastly, a local man named Bill Cummins was shot to death in an unknown location in the vicinity of Shades of Death Road. His body was dragged to the roadside just as the highwaymen had been, and put on display.

As if all of that wasn’t enough… The local authorities have never released specific numbers with regards to fatal car crashes on Shades of Death Road but any local will tell you that there are an exceptionally high number of them.

One local stated that driving the short seven mile road from one end to the other, there’s a two out of three chance you’ll see a bloody wreck on the roadside. Some of those that have not crashed have reported a bright white light chasing and tormenting their vehicle in what appears to be an attempt to run them off the road.

That particular occurrence seems to begin at the intersection of Shades of Death Road and a dead end street: Lenape Lane.

Then there are the wildcats which have inexplicably taken to the forests around Shades of Death Road. The general opinion is that if you see one, you’re already dead.

The numerous deaths along the road have left their mark on the region. An officially unnamed lake, nicknamed “Ghost Lake” by the locals (the same lake that the highwaymen made their home) is well known for sightings of smoke like phantoms walking the woods. Across the lake in an abandoned cabin (of course there’s an abandoned cabin) the highwaymen themselves are often seen.

So if a road hell bent on killing you sounds like fun head out to New Jersey. Don’t get out of your car even for a flat tire, watch out when you pass Lenape Lane, and pray you make it to “Hope Road” where Shades of Death Road ends.