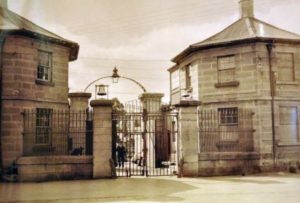 Built-in 1831 primarily as a house of worship for the ever-growing number of convicts and free settlers, the Hobart Penitentiary Chapel has seen many alterations over the years.

Closed to free settler worship in 1845, and greatly enhanced into a fully operational penitentiary in 1857 with the addition of cells and an execution yard, the resulting complex was described as hellish confinement by those imprisoned there.

Part of the complex was demolished in the 1960s during further construction; however, much of the site has remained in original condition for mroe than a century.

In more recent times, the previously demolished section of the chapel has been painstakingly rebuilt to the original design in order to restore the site to its former glory.

The entire site exhibits a haunted atmosphere, regularly seeming unusually cold with an overwhelming sense of despair and hopelessness. For some, the oppressive ambience of the place can become so overpowering that they are forced to leave, complaining of headaches and breathing difficulties.

The ghosts of the Penitentiary Chapel roam freely within the confines of the outer walls, each section of the site having at least one resident spirit and a myriad of reported unexplained phenomena.

However, some sections of the chapel display a larger volume of inexplicable occurrences on a more regular and spectacular level than elsewhere within the precinct.

The Penitentiary Chapel is also haunted by the ghosts and memories of convicts whose lives were abruptly terminated through execution. The first execution was undertaken within the confines of the penitentiary in 1857, with a total of 32 convicted felons being executed in the years leading up to the final hanging in 1946.

It is within the vicinity of the still-existent gallows that many visitors are exposed to the haunted atmosphere of the site, with experiences ranging from an overwhelming sense of fear, feeling hot and smothered even in winter when the temperature is low, the sensation of being grabbed by unseen hands, and the overpowering smell of blood and decomposition in the area directly below the trapdoor.

The solitary cells located beneath the floor of the chapel are also renowned for ghostly activity. Affectionately nicknamed the “Dust Hole” by convicts unfortunate enough to have spent time within this section of the penitentiary, the 36 solitary cells were constructed with insufficient ventilation and a complete lack of lighting.

Closed in 1847 due to concerns over the prevailing inhumane conditions of these cells, the oppressive atmosphere and the spirits of many still reside beneath the Chapel flooring.

Those willing to venture into the depths of this section report experiencing noticeable fluctuations in temperature, hearing footsteps and voices from within the empty cells, and catching momentary glimpses of spectral prisoners moving about in the darkness.