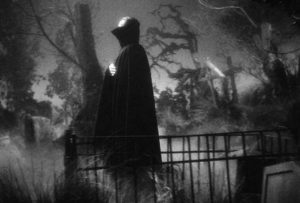 In the Northern outskirts of London you’ll find what has to be one of the most stunning gothic necropolises. Isles and isles of wooded paths lined with six foot tall marble and granite head stones, most dating back one hundred and fifty years.

It’s so beautiful in fact that it is one of the very few cemeteries in the world that is also registered as a natural park, but amidst the centuries old tombs, and the occasional sighting of a wild fox, you may also run into a two hundred year old vampire. Welcome to Highgate Cemetery…

Today vampires are regarded as no more than a portion of pop culture and even fantasized subcultures, but this wasn’t always the case. Pre 20th century vampires were regarded as quite real and in some regions a serious problem. London, the grand capital of the British Empire had never whole heartedly fallen into these beliefs but there were without a doubt elements that did believe, and in fact fought.

The original portions of Highgate Cemetery were built in 1839 as a series of cemeteries surrounding the London core. From the start the cemetery was marketed as a luxury plot for the well off, and in fact Highgate and the others of the series were nicknamed “the Magnificent Seven”. Some of its earliest tenants were the brilliant mathematician, William Kingdon Clifford, and even Carl Marx, the father of communism.

Highgate Cemetery spent the first century in peace with very little of the paranormal to mention, but in 1969 a group of youths, terrified out of their minds alerted the local priest to their trespasses leading up to that moment.

They told how they had been exploring in Highgate Cemetery when one of the boys got carried away and opened a crypt. While the boys were attempting to close the door on the crypt and hide their vandalism, something moved inside.

Not knowing what to make of it the boys stayed and watched, at least until what they described as a “grey figure” rose from the crypt and stood upright. That was presumably when they started running.

It wasn’t long before others began to see glimpses of what became known as the Highgate Vampire – some of these included reasonably high ranking members of society considering the stature of the cemetery. Its eyes were said to be blood red and would reflect like liquid when struck with light.

It was described as at least six foot but hunched in a manner that gave it a much shorter appearance. The hair from its head was gone as were its eyebrows and any facial hair it might have had when it was in the world of the living.

By 1970 Highgate Cemetery and its now most famous tenant, the Highgate Vampire were not a city wide sensation, but a city wide panic.

Residents in the surrounding communities of Dartmouth Park and Muswel Hill had taken to posting signs on the cemetery’s fences calling for either the capture of the Highgate Vampire or destruction of the necropolis as a whole.

Fortunately there were two London residents who were supposed experts on the subject at the time: a local man and self-professed “exorcist”, Seán Manchester and also self-professed “vampire hunter”, David Farrant. At first each took up arms individually declaring that they would destroy the Highgate Vampire, but before long their independent hunts would turn to rivalry amongst themselves.

It’s important to remember at this point that as a result of the Highgate Vampire investigations both Manchester and Farrant were receiving a considerable amount of press. The city of London was in a state of panic over a vampire and news networks such as the ITV were eating it up.

The commotion and attributed media circus should have ended when Manchester launched a community wide vampire hunt on Friday the 13th and it turned up no results, but now Manchester and Farrant had become the attraction.

Even three years later there were rumours spread that the two would meet in a “magicians’ duel” on Parliament Hill on Friday 13th in April 1973. A year later Farrant would be arrested in a wooded park adjacent to Highgate Cemetery carrying a wooden stake and a vile of holy water, no doubt intended for the elusive Highgate Vampire.

Manchester would go on to publish his book, which full of melodramatic details, borrows heavily even from the Dracula myth. In it there is the use of a psychic sleepwalking girl who leads him to a crypt. He describes the Highgate Vampire as an “ancient Vampire Lord” transported to England in a coffin by sea.

Despite the reckless and clearly attention seeking actions of Manchester and Farrant, there were a number of very real and documented events occurring during this time that added to the Highgate Vampire panic.

Foxes were turning up dead and drained of blood throughout Highgate Cemetery, but more concerning was the discovery of a headless woman’s corpse in a nearby lot. There’s no doubt that if a paranormal phenomenon was occurring at Highgate Cemetery Manchester and Farrant’s “magicians’ duel” only served to bury it deeper, but the question does remain: what was really happening at Highgate?