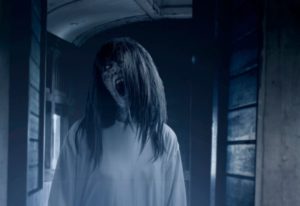 Ask any Thai person about Nang Nak and they will recount the tragic ghost story of Mae Nak Phra Khanong. According to local folklore, the story is based on events that took place during the reign of King Rama IV.

Centuries ago in a rural village in Thailand Nang Nak lived happily with her husband, Mak. Everything seemed to be going well for the couple as Nang had just fallen pregnant and they were both looking forward to the birth of their first child. However, their circumstances changed when Mak was called away to fight in a war leaving Nang to tend for herself alone.

Many months passed before Mak eventually returned home after being injured and barely surviving the war. As he traveled closer to his home he noticed that many of his fellow villagers did not speak to him or acknowledge him.

This was soon forgotten when he reached his home and was greeted by his beautiful wife, Nang and their new baby. Life soon returned to normality for Mak and Nang dutifully undertook the tasks of caring for her husband, their baby and cleaning their wooden Thai style stilt house.

Mak soon felt that something was not quite right, and strange things were occurring in the village. It was not until a friend of Mak visited him that things took a more sinister twist.

His friend, along with the other villagers, knew that Nang had died along with her child in childbirth yet Mak was living with the ghost of his departed wife seemingly unaware of what had happened.

The ghost of Nang, unable to accept her early death and thought of losing her much loved husband, was projecting an alternate world, disguising the real events from Mak.

After returning home Mak’s friend decided to go the next day to tell Mak that he is living with a ghost, however, the ghost of Nang would not allow this and killed him before he could tell the truth. The ghost of Nang became increasing protective over her husband, and killed anyone that appeared a threat to her or who would tell her husband what really happened to his wife.

It was not until Mak witnessed a strange occurrence that he began to realize that the world he thought he was living in was actually a charade implemented by his wife.

Whilst upstairs preparing a meal for them, Mak witnessed a lemon fall through a gap in the floorboards and his wife’s arm distend and stretch down to the floor below to pick up the fruit.

Shocked by what he witnessed he began to see cracks appear in his world and that his house was not a nicely kept home but was now a derelict shack. Fearing for his life he fled to the local temple.

Mak along with the terrified villagers decided to rid the village of the ghost of Nang and burned down the now dilapidated house however this failed to have the desired effect and only angered the ghost of Nang more.

After an unsuccessful attempt by the local shamen to exercise the ghost it was evident that they could not tackle the ghost alone as she was simply too powerful, such was her devotion to her husband, so it was decided to summon someone more powerful who could exorcise the ghost.

The countries most revered Buddhist monk was located and arrived to tackle the spirit of Nang. After many attempts by Nang to evade the monk he overpowered her spirit and she finally repented allowing her husband to break free of her and start a new life.

The body of Nang was exhumed and the monk retrieved a piece of bone from the forehead of Nang’s skull as this would destroy not only the ghost of Nang but also her soul. Her body was again laid to rest and the ghost of Nang disappeared.

The legend says that the piece of skull was made into a broach and worn by the monk until his death. It later arrived into the possession of His Royal Highness Prince Chumbhorn Ketudomsak and subsequently passed through the hands of many people. Today the whereabouts of the broach is unknown, but the sad story of Nang Nak continues to live on in Thai culture.