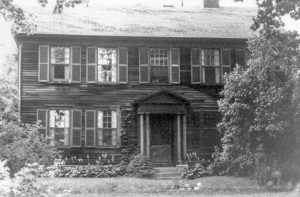 The Porter-Phelps-Huntington mansion, built in 1752, reports numerous paranormal experiences. Some say the original owner still walks within the walls of her home.

Also called Forty Acres and the Bishop Huntington House, the Porter-Phelps-Huntington mansion is located on Route 47, near Hadley, Massachusetts.

In 1855, 103 years after being built, the house went to a son, Frederic Dan Huntington. But it is more than its name that makes this building special. This colonial property is reportedly haunted.

The house was built in 1752 on a 40-acre estate. Although the building has had several additions and improvements over the years, much of the house remains as it was originally built by Moses Porter.

It features 12-foot ceilings, marble, elaborate woodwork, and colonial-style cooking fireplaces. Furnished in antiques from the time period, the mansion even includes the original four poster bed used in the Porters’ bedroom.

The Porter family had only lived in their mansion a few years when Moses Porter, a captain in the Militia, was called up to go fight the French and their Indian allies. He was killed in battle. His widow, Elizabeth Porter, lived her remaining days in the house grieving the loss of her husband.

Presumably, sometime after the death of the Elizabeth Porter, the strange events must have begun. The owners did not discuss the experiences that occurred within the house until around the time it was turned into a museum.

For that reason, it is difficult to pinpoint when the reports of a haunting began. However, those who have had paranormal experiences at the Bishop Huntington House continue to report the same enigmatic occurrences.

The primary ghost is thought to be Elizabeth Porter. Throughout the years, children living in the home have reported being tucked in at night by a kind lady. Some have even reported waking in the night to see an apparition over the bed.

The spirit would be wearing a full skirt and a glowing white cap. Also, reports of the sound of Elizabeth Porter’s spinning wheel have been heard coming from the attic, although no spinning wheel is on the premises any longer.

Other paranormal events include ghostly footsteps on the staircase to the attic and in the hallways. A child-sized apparition has been witnessed on these same steps, although the identity of the ghost child is unknown. Doors have also been seen to unlatch and open themselves.

Ghostly figures have been witnessed moving about in the house, and family members have reported hearing a “high, sustained musical note” once in awhile during the day and night. The four poster bed, which had originally belonged to Elizabeth and Moses Porter, has also been linked to the paranormal, with indentations being seen on the bedspread, as if something invisible was laying there.

Is the Porter-Phelps-Huntington House haunted? For a small fee, one can take a tour and find out for themselves. The museum remains open May through October, although some may say that there are residents year round.