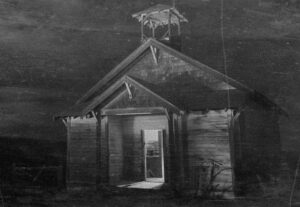 Just west of Mountaintop, in Wright Township, lies the village of Rippletown. Rippletown is a quiet place, and has been since the 1860s when two men, Ripple and Line, built a sawmill on the south bank of Big Wapwallopen Creek.

Within a few years, about a dozen homes lined the creek, and it soon became necessary to build a schoolhouse.

The Rippletown School stood at the corner of Church Road and Line’s Lane, where the parking area of the Rippletown Cemetery is located. By the 1880s, this schoolhouse had already been abandoned, and some say that the reason for the abandonment was because the building was infested with ghosts. 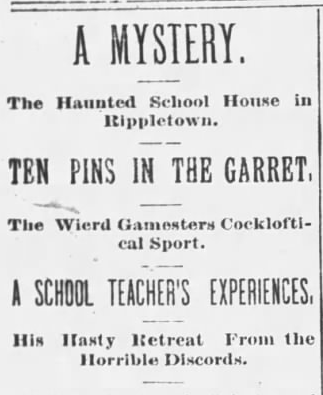 The official reason given for the school’s closure was that it was nearly impossible to find a teacher who would stay for more than a few weeks, presumably because of the ghostly phenomena.

According to those who had taught classes there, as soon as a person set foot into the schoolhouse, he or she became aware of an unaccountable presence, and the creepy feeling grew stronger with each passing minute.

The July 26, 1885 edition of the Wilkes-Barre Times Leader describes the experiences of one former teacher, who had recently graduated from Wyoming Seminary:

“The ghosts, hobgoblins, visitants from the other world, or whatever they may be, manifest their presence in but one way– a rumbling and cracking of the ceiling as if someone were above it rolling a game of ten pins.

“The games begin at around 5 o’clock each afternoon, apparently with but one or two players, but as the shades of evening fall and night advances the hilarity increases, and during the midnight hours but one result of the pandemonium seems possible– that the very roof may fall.”

Another teacher shared his experience with the ghosts of the Rippletown Schoolhouse with the reporter. The 1885 article continues:

“After having spent several weeks in guiding the youth of Rippletown up the giddy steps of learning, he found himself a little rusty, having been some time out of school, and concluded to spend his evenings at study…

“He felt, as others before him had felt, that there was something there. At length a little rumble overhead was heard. The student teacher was startled, of course– he admits he was– but after carefully examining the ceiling and satisfying himself it was all there, he concluded that his fears were unfounded and again gave so much of his attention as it was possible to his books.

“Another, and another, ball rumbled across from corner to corner… the entire ceiling seemed about to give way under the weight of the heavy balls rolling over it, and as a hundred or more leveled the pins, there came a crash that convinced the now-frightened teacher that it had done so.

“He made no investigation of the results, but grabbed his hat and hastily decamped, forgetting in his flight to extinguish the lamp… He taught out his term, but never more did he remain at his duties after 5 p.m., and there is not enough money in the district to induce him to take another term there.”

So who, or what, caused the ghostly sounds of ten-pin bowling at a rural schoolhouse?

While Rippletown didn’t have a name until 1875, the surrounding area had been settled as early as 1833, when Cornelius Garrison erected a sawmill on Big Wapwallopen Creek, in a portion of a county that is now Fairview Township (which was created from Wright Twp. in 1889).

The population of Wright Township grew from 278 in 1860, to 881 in 1890, by which time the old schoolhouse had already been abandoned. Perhaps an inn or tavern had once stood on the same spot, along a lonesome stagecoach trail flanking the Big Wapwallopen, in the days of the Delaware and Shawnee.

If such is the case, no record of this long-forgotten establishment exists.

As for the graveyard, which the locals call either the Rippletown Cemetery or the Albert Cemetery (after a nearby village’s first postmaster, William G. Albert), it is doubtful that any clues about the haunted schoolhouse might be found here, though some locals have reported seeing strange lights flittering among the tombstones. The oldest legible gravemarker is that of John Owens, who passed away in January of 1862.

But, undoubtedly, the cemetery contains an unknown number of unmarked graves. For instance, an 1878 obituary for Letitia Owens, who drowned in the family pond at the age of 27, states that she is buried somewhere in the Rippletown graveyard, though her headstone is nowhere to be found.

Pre-1900 obituaries also show Rippletown burials for Stella Swortwood (1886), Mary Shafer (1886), and an unknown Italian immigrant laborer who was killed in 1888 while working in Solomon Gap.