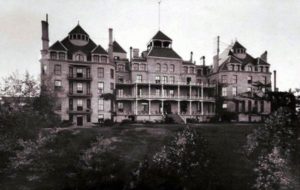 If any place could conceivably be haunted, it is the Crescent Hotel in Eureka Springs. The “Grand Old Lady of the Ozarks” was built in 1886 as a resort for those seeking the healing waters that flow from beneath the mountains in the area.

It was constructed by Irish stonemasons from Chicago who did a masterful job, the hotel resembles a stately mansion that overlooks the city below. During construction, a worker fell from the upper scaffolding down onto the second floor slab, where he died in the area that is now Room 218.

There were a few other injuries, but no more deaths and the hotel was completed on schedule. The regal front doors opened into the lobby where guests were greeted with every amenity imaginable.

For twenty years, people flocked to the hotel to breathe the fresh mountain air and immerse themselves in mineral baths. The popularity of healing waters waned, however, and the Crescent fell on hard times. Just after the turn of the century, the front doors to the elegant lobby closed.

In 1908, a group of investors purchased the building and opened it as the Crescent College and Conservatory for Young Women. The accommodations were first class, the faculty was prestigious, and wealthy families from across the nation sent their daughters to the exclusive Eureka Springs school.

One semester took a tragic turn when a student fell in love with a local boy from a poor family in town. Her father forbade her to continue the relationship, and in desperation, the girl reportedly threw herself from the uppermost balcony of the building.

The incident was hushed, and enrollments continued. Even with the high price of tuition, however, the school was not financially viable for its investors, and the doors closed again in 1924

Several businesses tried to make a go at the Crescent over the next few years, until in 1937 it was purchased by Doctor Norman Baker to be used as a health resort.

Baker had to tiptoe around the law because his title of doctor was self-conferred, and he had recently been in trouble in Iowa for practicing medicine without a license.

He brought his guaranteed “six-week cure for cancer” to the Crescent, however, and replaced the stately decor of the hotel with bright art-deco designs featuring his signature color: purple. Some people hold that Baker was a harmless man who hoped to heal the terminally ill with the local mineral water.

Others tell stories of horrible experiments that he conducted on patients to try and discover the ultimate cure for cancer, with footnotes of midnight cremations and cancerous limbs in jars sealed in the walls of the basement.

Whatever the truth may be, many people died in the hotel over the Baker years – the “doctor” was simply unable to make good on his guarantee of healing. The American Medical Association alerted the authorities about his new hospital, and Norman Baker was convicted in 1940 and sentenced to serve four years in Leavenworth.

Yet again, the doors to the building were locked, and the Grand Old Lady sat silent on the hillside. In 1946, the building was purchased once again, this time with the intent of restoring the hotel to its original glamour. To put it simply, the new owners succeeded. Today it is a magnificent place full of history and more than a few ghost stories.

Much of the ghostly activity in the Crescent seems to be centered around two rooms. In room 414, a family was watching television when a shapeless “thing” walked through the outside door, crossed the room, and entered the bathroom.

Frantically, they called down to the desk, complaining that their room was haunted. They were promptly given a room in another local hotel.

Room 218 has been given the tide “the ghost mom” because of the large number of guests who have experienced supernatural phenomena there. Visitors have reported hearing strange sounds in Room 218 at night. One time, a bellboy had just opened the door when, suddenly, it slammed right in his face.

One guest said he could not sleep in the room because something was shaking him awake. The most commonly seen ghost in the Crescent Hotel is a distinguished-looking man wearing a beard and formal clothing. He has been seen in Room 218, but he usually appears in the lobby and bar area.

In the early 1990s, an auditor entered the bar after closing hours to get a drink of water. He clearly saw a bearded man sitting on a barstool. The auditor tried to talk to him, but the strange man did not answer back. The auditor left the bar to get his partner. When he returned, the strange figure was gone.

One of the auditors went to the lobby to look for the man. As he stood at the foot of the ornate staircase, the auditor saw the man from the bar staring down at him from the second-floor landing. The auditor began walking up the stairs but felt something pushing him back as he approached the second floor. He immediately reported the incident to the manager.

Today, the Crescent Hotel is one of the most visited hotels in the South. With its long and extensive history, it is also known to be one of the most haunted places in the Ozarks. Staff and guests alike tell stories of a number of ghosts that are still said to inhabit the old hotel.

The Legend Of The Headless Gringa

The Tale Of The Child Who Saved A Ghost