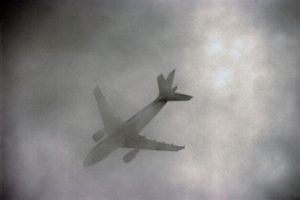 It is often a misconception that only buildings or land maybe haunted, in truth almost any object can tether the dear departed to this earthly realm. Planes, trains, and automobiles have had their share of hauntings as well.

A case in point in the haunting of Eastern flight 401, which in the late hours of December 29th, 1972 suffered a mechanical failure and crashed into the Florida Everglades about 19 miles short of the runway at Miami International Airport at a speed of over 200 miles per hour. Over 100 people died that faithful night including the flight crew.

In the weeks after the crash may of the surviving equipment from the wrecked 1011 was used to replace broken equipment throughout the Eastern Fleet, and that’s when the hauntings came.

Over the next several years members of the flight 401 crew would appear, at various times, to help prevent further crashes of planes which used the flight 401 parts. The tie that binds was strong, and many accidents were prevented by those vigilant spirits.

In our own backyard, located near the Oakland Airport, lies a small plane museum, Oakland Aviation Museum. The museum is a hidden gem in our area and a favorite for kids and adults of all ages.

Housed within the museum is a whole host of interesting exhibits ranging from the engine room (where you can get up close and personal with a wide range of jet engines), a section on Bay Area aviation and an entire section devoted to the legendary aviatrix Amelia Earhart who also met with a mysterious end as well as history about aviation in our area, oh and its very haunted as well.

Visitors to the museum have reported seeing a World War II aviator moving through the hanger as well as hearing voices and mysterious sounds around several of the main exhibits.

Investigators, called to the museum to investigate, have recorded EVPs (Electronic Voice Phenomena) including a haunting message to “open the chest…” which was heard by the museum director. Incidentally the chest in question was nearby in an exhibit profiling women in aviation and has never been opened!

It is a massive aircraft and dominates the outdoor area. It’s hard to describe the scale of this imposing aircraft other than to say it is simply massive and dwarfs the other aircraft around it.

Originally assigned to the No. 201 Flying Boat Squadron of the Royal Air Force, the City of Cardiff was later sold to British Overseas Airways Corporation (BOAC) and used to fly passengers from Southhampton, United Kingdom to Johannesburg, South Africa which it did for many years.

Later it was sold to Howard Hughes who owned it in the 1960s. The City of Cardiff was even used in for interior filming of Raiders of the Lost Ark, but the ghost who haunts the plane appears to be a holdover from its days in BOAC.

For many years it has been reported that a women haunts the lounge section of the aircraft, and has been seen sitting in one of the seats as visitors pass by. In fact in a stunning video shot by California Ghost Chasers you can actually see the spectral passenger getting ready to take her seat on the aircraft as it would appear she is removing her coat.

Investigators have also captured a large number of EVPs and mysterious sounds inside the aircraft as have many visitors to the museum. So the City of Cardiff may be grounded but it is still very much filled with passengers on an eternal flight into the unknown.

So if you’re free on a Saturday afternoon and love aircraft visit this hidden gem. Bring the kids! The museum even sports an exciting play area in the front replete with a control tower and planes for the kids to play in and don’t forget to bring your camera so you can get some amazing photos of the planes.

Be warned your photos my include other members of your tour you hadn’t counted on and don’t be surprised if, during your visit, you meet someone new especially while touring the City of Cardiff! If you do politely tip your hat and maybe she will be willing to strike up a conversation before dissolving into the ether.

If you catch a glimpse of the phantom aviator, or maybe the ghostly passenger please send them our way!

True Reports of When Ghosts Attack