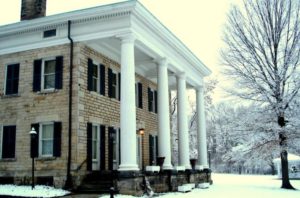 Oh, Akron. You’ve given us tires, a slew of wonderful musicians, more tires, quaker oats and alcoholics anonymous. Despite the childhood adage that states one person is made of rubber and the other person is made of glue, “Rubber City” does seem to have some former residents that have stuck to the location, even after their deaths.

One of the area’s most haunted places is a house built in 1837 by Summit County’s first state senator, the Perkins Stone Mansion.

Colonel Simon Perkins grew up in Warren, Ohio as the son of wealthy mover, shaker and Akron co-founder General Simon Perkins. At 20 years old, the good Colonel moved his wife and their daughter to a small cabin in Akron and ordered the construction of a fine stone Greek Revival mansion nearby.

The year was 1837 and it seems the only thing more erect than the columns of the mansion was Simon, himself. His wife, Grace, would bear him eleven children before passing away in 1867.

Aside from serving as a state senator and president of a railroad, Simon also took up a farming business with famed abolitionist, John Brown – who he moved into his original Akron home. After his death in 1887 the house was passed down to several generations of the Perkins family, before finally being sold to the Summit County Historical Society in 1945.

During the Colonel’s time, he was known to play host to Native Americans as they travelled the nearby Portage Path, offering food and a warming seat by the fire. Consequently, the first account of supernatural activity at the place was documented in 1955 by local historian, Arthur H. Blower, who noted the presence of an old Indian man that would enter the kitchen of the house, sit by the fireplace for a short while, then exit without saying a word.

Though the interior underwent a major renovation in 1986, it was improvements made in preparation for a 2006 Junior League Designer Showhouse that really seemed to kick up the spirits.

It started when volunteers would notice indentations on the edge of the mattress in the Colonel’s bedroom, indicating someone had done the unthinkable and actually SAT DOWN on the antique bed. Several times a week they would have to don white gloves and straighten out the antique mattress and quilts, only to find them freshly disturbed the next day.

Then, when giving tours of the Alexander Room, so named because it’s furniture belonged to pottery mogul, J. Park Alexander,, guides and guests started noticing an empty chair rocking by itself in the corner of the room, accompanied by the faint odor of baby powder.

During Christmas, a mannequin that decorates the room is found with it’s head detached and lying on the floor every single day. Psychic and historical researchers believe the entity that haunts this room to be Martha, the wife of J. Park Alexander. It is thought that she came with the furniture, making ghosts the biggest threat to the antique business since bed bugs.

Shortly after this, something started taking down the kitchen curtains every night after all the staff would leave. It wouldn’t be long after this that the ghosts would start showing themselves.

While putting together a pictorial for the showcase, one member of the Junior League actually captured the unmistakable image of a ghostly woman descending the main staircase (see photo below). She is thought to be Simon Perkins’ wife, Grace.

While she is supposedly quite fond of the current director of the Summit County Historical Society, which manages the building, the spirit was much less kind to her predecessor. A psychic claimed to have received a warning from Grace that she would push the woman down the stairs, were she not careful. Apparently, the specter made its feelings quite clear, as the previous director admitted to always being terrified of the house.

Any time you add dead children to a location the creep factor increases exponentially, and this haunting certainly does that. Around the same time that the photo of Grace was taken an interior designer spotted a young boy and a girl playing with a ball on the third floor hallway.

As he was describing the experience to a curator, everyone’s hair stood on end when a staff member was able to produce the ball he had just described – from the antique storage area in the adjacent John Brown Museum.

After returning to his work on the second floor, the designer had the sensation that he was being watched and turned to find the two children peeking at him from the staircase. I imagine these children are also the ones responsible for a baby doll in the kitchen that is found in different positions each morning.

Another time, a volunteer left her daughter waiting in her car while she ran inside to lock up the building and set the alarms. When she returned to the car her daughter told her that she would have to open the house again as there was a little boy still inside that had been looking at her from a first floor window.

After going back in and searching high and low without finding a single living soul, the confused woman locked up the building for a second time and headed home.

The most recent addition to the residents of the Perkins Stone Mansion is none other than Simon Purrkins, a black cat that came to live at the house in 1998. After his passing, in 2013, people have seen him trotting past doorways, felt him brush against their legs, heard his ethereal meowing and he even issues the occasional kitty sneeze! I know who I hope to meet when I make my visit.

The Perkins Stone Mansion is currently closed for the season, but will be open Wednesdays through Saturdays starting April 5th, 2017. They also offer ghost tours and investigations during the Halloween season. For more information, please visit their website at www.summithistory.org.

Ohio Ghost Stoy: Something Strange Was In Our House