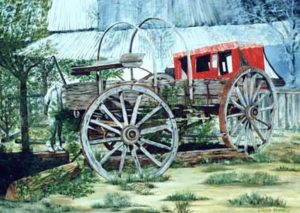 In the early 90s, artist Laura P. created a painting based on a supposedly paranormal photograph taken by commercial photographer James Kidd.

Kidd had taken a photo of stagecraft in Tombstone, Arizona and upon developing it noticed something surprising: perched on a log left of the wagon there was a figure that had not originally been present when the photo was taken; moreover, the figure appeared to be missing its head.

After hearing the story in person from Kidd, Laura was inspired to create a 16 x 20-inch oil painting based on the photo. Almost immediately upon beginning her work, she says, she was struck with unease as to why she had chosen this subject.

After finishing it, she hung it for display at a local business, but within three days she was called back to remove the painting because the people who worked in the office claimed that the painting was moving on its own, causing papers to go missing and, in general, making people feel uncomfortable.

The painting was returned and eventually taken along with Laura and her husband when they moved to their new home where the anomalies continued–strange, small occurrences that persisted for years and always seemed to involve the painting or happen in close proximity to it.

“In 1995, my husband and I moved into a brand new home in Tennessee. We wondered if this ghostly goings-on would stop. But they didn’t. Oddly, the roof on the garage of this new home had a leak when it rained. The roofers came out three times to repair it, and although they worked on it they said they could not find the cause of the leak.

“It didn’t make any sense. Nothing they did stopped the darn leak. Finally, my husband asked me where the ghost painting was. It was leaning against the wall between the living room and garage. We moved the painting… and the garage roof never leaked again.”

“One evening I was preparing dinner. We had an island bar and that is where I set the table. I picked up the salt and pepper shakers, which were two little canning jars with handles, and set them on the bar.

“I went to the door and called to my husband that dinner was ready. When I got back to the bar, salt was spilled all over it and on the floor. The salt shaker, standing upright, was still where I had set it down. We have no animals or children in the house to blame for the spill. It is completely unexplained.”

“This event really scared me because it could have injured me. We had been doing some yard work and went into the garage to rest where it was cool. My husband said he would mix us some drinks. He returned with the drinks in thick gold-colored glasses with ice cubes.

“We finished our drinks, and he said he was going to have another and I said I would too. So he mixed them in the house and brought them out. I had taken one or two sips from my drink when I looked down to see that a large chunk of glass had been broken off the top of the glass.

It was perfectly fine the first time I drank from it. Right away I thought my husband had knocked it on something, but he swore he hadn’t. We looked all over the garage floor for the piece of glass, but found nothing. We went into the house where my husband fixed the drinks and got down on the floor with flashlights and looked. Nothing.

“I poured the rest of the drink through a strainer to see if the chunk of glass had fallen in, but there was nothing. The missing piece was too large to swallow without me noticing it, but I still had this sick feeling in my stomach. We never found the missing piece of glass.”

Laura told some friends about the painting and one of them doubted the story vehemently and demanded to see the canvas with her own eyes. Upon seeing it, she laughed at it. According to Laura: “That night at [the woman’s] house, a clock that had been on the wall for 40 years, fell down and broke into a hundred pieces.”

Finally, a friend took some photos of the painting (which is weird in its own way, given that the painting itself is based on a photo). The friend claims he had laid the photos out on the table in his home and that when he went outside he saw a white hazy figure that seemed to be missing its head. He got rid of the photos immediately.

Currently, the painting is hanging in Laura’s house. A few people have asked to buy the painting, but I am afraid to sell it. What would an unhappy ghost do in their lives?

“I still don’t actually believe in ghosts… Yet if I had it to do over, I would not have created this painting”, says Laura.