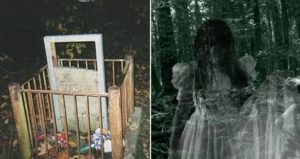 There are thousands of ghost stories that have their basis in tales of love gone wrong. Jealousy, cheating, disapproving families and unrequited love have led many a human to a bad end. In many of these cases the favored method of death seems to be falling.

Lover’s leaps are scattered throughout the world. Even in flat, old Ohio spurned sweethearts find buildings, bridges and balconies from which to take the plunge.

If you were to use these stories as a learning tool you would probably think the key to a long and happy marriage would be to remain in a flat and low location, but you would be wrong. Like love, vengeance always finds a way – even in the unusual form of a workhorse named Bob.

Many years ago, 174 to be exact, a man named James K. Henry was riding his trusty steed along the rural lanes of Perry County trying to solve a problem that had been plaguing his mind.

You see, in 1843 society it was expected that a man should be settled down by the time he reached 30 and James was just about to reach that milestone. James conflict arose from the fact that he was sweet on two gals, Mary Angle and Rachel Hodge, and they just happened to be frenemies.

So here we had James, weighing his options as he trotted along atop of Bob when he accomplished something I would think impossible: he fell asleep while riding his damned horse! When he awoke to find that Bob had taken him to the house of Mary Angle, he took it as a sign from heaven and proposed to lucky lady then and there.

The two were married on January 11th, 1844 and a short period of bliss ensued. They would often spend romantic evenings riding in their brand new carriage, pulled along by trusty old Bob. It wasn’t long before Mary became pregnant and just a little over a week after Valentine’s Day of 1845 she went into labor.

This is where things started to go downhill. On February 28th both Mary and the baby died during childbirth, driving James into a deep period of mourning. It wasn’t too deep, though. Remember that he had a plan B. James had Mary and the child buried in the corner of the Otterbein Cemetery and bided his time.

After a respectable waiting period of 3 years, James put on his courting hat and bended his knee for Rachel Hodge. On December 7th, 1848, the two tied the knot.

In a rather unusual move, Rachel wore a black dress for her wedding and the newlyweds stood aside Mary’s grave – forcing her corpse to be an unwitting bridesmaid. Since Rachel had been a bridesmaid at James and Mary’s wedding this act could be seen as a return favor or slap in the skeleton face, depending on your level of optimism towards human nature.

Not long after their wedding, the groundskeeper from the Otterbein Cemetery reported to the happy couple that he had witnessed strange noises and eerie lights emanating from Mary’s grave. Shortly after this he rushed James to the plot to show him another interesting development.

It was the red stain of a horseshoe that suddenly appeared on the back of his first wife’s burial stone. This unnerved the fellow but didn’t stop him from fulfilling his husband duties. He and Rachel ended up having four children together and it seemed that, other than being perplexed by the strange mark on the stone, Mary had become a distant memory.

This remained the case until James went to the barn to do some chores on the morning of April 8th, 1859. When he didn’t return for lunch, Rachel set out to find her errant husband, unaware of the shock that awaited her.

Inside the barn she found James dead in the stall of Bob, the horse, with the mark of the horseshoe stamped neatly into his forehead, just as clear as the stain that adorns his first wife’s grave to this very day.

Even though Mary has taken her justice upon James via a horse named Bob, her spirit still remains restless. People have reported a strange blue light floating through the graveyard at night, unearthly moans and the sounds of galloping horses where none are present.

I visited the graveyard yesterday and it definitely has a creepy vibe. There is a large tree by the church that can make some fantastically disturbing creaking noises, as well as some extremely well-preserved gravestone, including the fenced off and reinforced marker of Mary Henry and it’s mysteriously preserved horseshoe stain.

So, if you are looking for something fun to do tomorrow why not visit Otterbein Cemetery in Perry County? You can even make it romantic by taking a beau and, while gazing at the horseshoe stain, whisper in their ear “Til death do us part, and if I die first and you get with someone else then my ghost will track you down and kill you.”