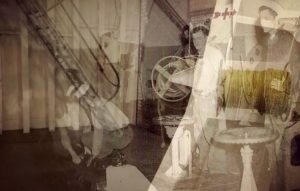 Over 300 people have died on the USS Hornet. Many of these men have returned, and have been seen going about their daily routines, still serving on one of the most famous decommissioned ships in America’s fleet.

Because an aircraft carrier is one of the most dangerous places to work, many of these men died suddenly, before they had a chance to realize what was happening to them. Many paranormal investigators and psychics believe that when the cause of death is this sudden, the spirit of the deceased is trapped between life and death. This appears to be the case for the spectral men of the USS Hornet.

The USS Hornet docked at Alameda, California, is the eighth aircraft carrier to carry the Hornet name. She was also the one who saw the most action and devastation, commissioned in 1943.

Along with deaths from combat, sailors died as a result of walking into propellers, becoming sucked into air intakes, exploded, burned, and maimed; the Hornet also had the highest suicide rate in the Navy.

Today, doors bang open and close by themselves, faint voices are heard responding to orders or just casually talking about how much they miss home, and ghostly crew are commonly seen about the ship.

Three areas in particular are reported to be the nerve centers for the haunting. A crewman who died as a result of a steam accident in the engine room will grasp crew with unseen hands and jerk them away from the massive mechanics; he himself was killed when a burst from a blown steam pipe severed his arm leading him to bleed to death quickly.

A Kamikaze pilot captured when he overshot the landing deck on a suicide mission during the war and crashed into the ocean still wails from the holding cell he was kept in during the last month of his life.

The crew quarters below deck seem to become especially eerie when you step just past the line marking where tours can and can not go. At the end of the passageway there is a dim, red bulb, indicating that the public is not allowed there. Step just over the line and you might feel someone poke your chest.

The noises and disembodied whisperings, the sightings of crew members long dead, and the alternating hot and cold spots on the ship are no cause for alarm. Other than pulling the occasional visitor out of “harm’s way,” it is thought that the ghosts of the Gray Lady want only to go about their business, carry out long ago orders, and watch over the current refurbishment of the ship that they called home.

The USS Hornet is one of the best haunted spots to investigate for yourself, as they allow group overnighters through the stay aboard program. Retired crew and other volunteers sleep aboard the ship on three night rotations. The ship is a popular field trip for Cub Scouts and schools.