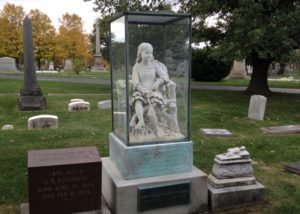 One of the most well-known and mysterious grave markers at Graceland Cemetery is a life-sized, intricately detailed statue of a little girl named Inez, located near the center of the cemetery and also at the center of one of the most famous ghost stories in Chicago.

For decades the true identity of the girl and of the person buried there have been in question. Based on extensive research it is now all but certain that the girl is Inez Briggs, the daughter of Mary C Clarke from a previous marriage.

The statue rests inside a plastic box, protecting it from the elements, and depicts a young girl seated on a wooden bench, wearing a lacy dress and holding a parasol in her right hand, with a small flower in her left. Her wide face shows a hint of a smile, and her wavy hair is combed back. Her hat rests near her shoulder, tied around her neck by a wide ribbon. A locket and chain rests on her chest.

The statue was created by Andrew Gagel, who was born in Germany in 1846, and immigrated to the United States in 1872.

There are two stories surrounding the death of 6 year old Inez, the more common one being that she was out on a summer picnic with her parents when she was struck by a bolt of lightning during a summer thunderstorm and killed. Another version of her death though is that she was accidentally locked out of the family home or was intentionally locked out as punishment when she was hit by lightning.

There are many ghost stories surrounding the grave site. People have heard weeping coming from the area. Other people claim that during thunderstorms the statue disappears, only to reappear later, back in its glass case.

One cemetery employee reportedly ran from the cemetery terrified when he found the glass case surrounding the statue empty. The legends also report recent sightings of a young girl wearing clothing from the late 1800s, running and playing in the cemetery.

Children who visit the cemetery with their parents report meeting and playing with a young girl, but the parents never see or hear the playmate. There have also been numerous stories about guards and night watchmen at the cemetery reporting that the box containing the statue of Inez has been empty whenever there is a a summer thunderstorm.

Apparently, little Inez is afraid of being struck by lightning again so, when the storms approach, she runs off and hides. Investigators, however, have poked some holes in the story of Inez Clarke.

First of all, there is no “Inez Clarke,” not in the cemetery records, and not in the city’s census information. Some of these reports suggest that the statue was simply a sample made by Gagel to demonstrate his artistry, and was placed at the cemetery as an advertisement of his work. That theory, however, doesn’t explain the weathered inscription on the marker beneath the statue.

Others have reported that Inez was Mary Clarke’s daughter from her first marriage, her name is actually Inez Briggs, and she died of diphtheria, not a lightning strike.

Supporting that theory is the 1880 Chicago census report, which shows a girl named Inez Briggs living with her grandparents, David and Jane Rothrock, and that theory is perhaps substantiated by the fact that they are buried next to Inez.

Mary Briggs married John N. Clarke, and somehow all three generations ended up together at Graceland. It appears that the facts don’t support the stories and legends of little Inez. But they don’t disprove them, either.

Whether she’s Inez Clarke or Inez Briggs, whether she died from diphtheria or a lightning strike, on a picnic with her parents or at her grandparents’ home, there is no absolute proof that Inez doesn’t leave her glass box during thunderstorms, and doesn’t play with young cemetery visitors. And whether you believe any of that or not, one thing is certain… it’s a beautiful statue, and it has inspired some fascinating stories.

The “Romance” of the Pony Express and Haunted Hollenberg Station