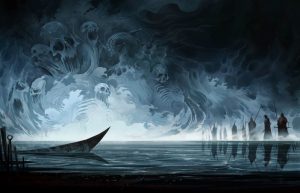 One would expect to encounter ghosts in the surface world, haunted houses have kept a hold on the public imagination for ages. Ghosts also seem equally attracted to dark stretches of abandoned highways and desolate beaches.

But who is to say that ghosts remain confined to dry land? What is to keep them from haunting the watery depths of lakes and oceans? These tales would seem to confirm that ghostly spirits do indeed dwell in the depths.

On June 4, 1947, a freighter named Emperor struck hard onto Canoe Rock, near Isle Royal on Lake Superior. The vessel struck so forcefully that she split in half, the stern section sinking almost immediately and the bow stuck hard on the rocks. Twelve sailors lost their lives in the accident. If tales are to be believed, they remain on watch, in the depths of Lake Superior…

One SCUBA diver exploring the wreck was shocked when he swam into the crew quarters and saw a man, or ghost, lying in a bunk. This spectral crewman turned and stared at his visitor, who quickly decided he wanted to be anywhere else and split for the surface.

Another similar story was told by a diver who explored the Emperor’s engine room. The man watched in heart-stopping terror as a man materialized out of the darkness, a shadowy wraith, his eyes black and hollow, ignored the diver and began to go about his duties, maintaining equipment long dead.

Perhaps, due to the sudden nature of the ship’s destruction, these men are unaware they are in fact dead and continue to perform their duties as if they were still alive.

A truly unnerving tale is that of the Johnson and the Haskell, fishing boats operating out of Massachusetts in the early twentieth century. A terrible storm struck as the Johnson was out fishing one night. With her masts damaged by the wind and waves, all the crew could do was throw out a storm anchor and hang on for dear life.

Out of the howling night, her anchors broken and out of control, came the Haskell! The two crews tried desperately to maneuver out of the way but the Haskell collided with the Johnson, which sank like a stone, taking her crew with her. A tragic accident, but part of life at sea. The crew of the Haskell mourned the lives of the Johnson crew and moved on. Or so they thought.

A year later, the Haskell and her crew were fishing near the site of the fatal sinking. Suddenly, men in dripping oilskins hauled themselves out of the water, onto the decks of the boat.

The ghosts of the Johnson crew had returned. Ignoring their living shipmates, these ghostly men picked up the nets and began to the work of fishing. At one point, as the first mate watched in complete shock, a ghost turned and stared directly at him, slowly shaking it’s head.

Perhaps shaming the man for his role in the accident that claimed the lives of him and his men. After a few minutes of this, the ghosts climbed back overboard, returning to their watery graves.

What are we to make of these ghostly tales? Do the spirits of the dead really inhabit the murky depths of lakes and oceans? You may want to take a careful look about you before you venture into the deep, after all, one never knows who is watching…

Family Ghosts: When Relatives Stay On Earth After Death