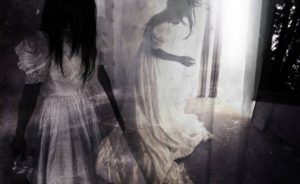 In 1849, a girl from a rich family named Anna Baker fell in love with a local ironworker. Anna’s father Ellis Baker, however, refused to let her marry him and banished the young man from their hometown of Altoona, Pennsylvania, dooming his daughter to a life of spinsterhood.

Anna was so angry with her father for costing her the love of the only man that she ever loved that she never again fell in love, and remained bitter and angry until her death in 1914.

Before her father sent the man she loved away, Anna had chosen a beautiful wedding dress that she intended to wear at their wedding. When the wedding did not occur, servants of the household would sometimes see Anna wearing her wedding dress and dancing under the moonlight.

The wedding dress was ultimately sold to another wealthy woman from a local family, Elizabeth Dysart, who wore the dress instead.

Eventually, the Baker mansion was turned into a museum, and the wedding dress was donated to it and was placed in a glass case in what was formerly Anna Baker’s bedroom.

Visitors report seeing a women’s image looking back at them when staring through the glass case at Anna’s wedding dress, and claim to see the dress move on its own, especially during full moons. The dress sways from side to side, as if an unseen bride is standing in front of her mirror, admiring herself in the gown.

Visitors would also tell the tour guides that they saw a women dancing while wearing a wedding dress within the Bakers estate.

Investigators who have searched for an explanation for the phenomena have come up empty-handed. No one can be sure why the dress moves by itself, although many speculate that Anna Baker has once again reclaimed her dress.