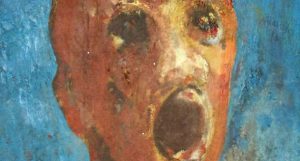 A painting known as The Anguished Man can lead to unexplained paranormal activity. It is presently in the home of Sean Robinson, a resident of Cumbria, England.

When Sean was a kid he saw the odd looking oil painting in his grandmother’s home. It was well hidden under lots of curtains in the cellar of the old house but Sean felt drawn to it by a mysterious force. He would spent quite some time alone with the painting and just stare at it for hours. As time flew by and his grandmother passed away she left the painting to Sean.

By the time Sean had a family of his own he had brought the painting in his house. After many arguments with his wife about it, Sean eventually put the painting on the wall. As it turned out this was a huge mistake. The painting was possessed by an unknown spirit that caused paranormal activity around the house.

Doors were cracking in the middle of the night complemented by screams coming from nowhere. But the most terrifying experience the whole family had were the nightmares which would suddenly wake them up night after night.

When Sean finally understood that the painting was causing all of the trouble he decided to investigate its origin. What he found out was more than disturbing: the artist who painted The Anguished Man had committed suicide. Before he killed himself he had mixed his own blood with the oil paint that he used for the painting.

Despite the unexplained activity, the painting remains in Seans basement as he is unwilling to sell it.