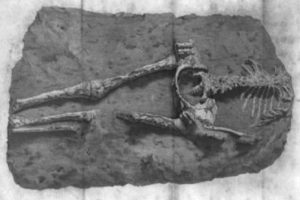 Very little is known about this archaeological find and even the British archeologists, in whose homeland this artifact is still stored, almost do not know anything about it.

Or at least it was stored earlier, because there has been no news about this find for many years. And moreover, there are only two well-known photographs of this find, one black and white and was made somewhere in the early twentieth century, the other is of better quality and, apparently, was taken in the middle or end of the twentieth century.

In 1810, the English fleet captured the Caribbean island of Guadeloupe, owned by France, and among the many local trophies captured by the British and taken to England, there was a limestone slab with a skeleton of a woman without a head and hands embedded in it.

It was a perfectly normal skeleton of a modern type and was discovered in a layer of limestone 1.6 km long on the northeastern coast of the island.

Before the British invasion, many skeletons of ancient animals and only one human skeleton were found in this place by the French. And the modern dating of this layer gives 28 million years. That is, this layer was formed 25 million years before the appearance of man as such.

A plate with a skeleton was brought to the British Museum in 1812, and the scientist Karl Koenig, who examined the skeleton 2 years later, immediately ran into dating problems, confirming that it was a modern type skeleton, but honestly admitting that he did not know how old it was.

In those years, the study of the remains of ancient people was just beginning, for example, the first bones of a Neanderthal man were found only in 1857.

Therefore, the ancient skeleton, even with obscure dating, caused a lot of interest and became a permanent part of the museum’s collection of natural history.

Towards the end of the 19th century, this skeleton began to attract special attention of creationists (supporters of the divine theory of the origin of the world and man). According to them, undoubtedly a very ancient and yet completely modern human skeleton pointed to the correctness of their beliefs, and belonged to a woman who lived before the Flood.

However, soon a strange skeleton was removed from the museum shelf to the basement, where it should still be under the number PA HR 4128. Until 2006, mention of this skeleton could even be found on the official website of the British Museum, but then it was removed.

No one so far, as is known, has not engaged in a thorough study of this skeleton and has not even made such attempts. Therefore, some conspiracy theorists from time to time think that this skeleton is hidden from the public, so that no one can ask uncomfortable questions.

According to skeptics, this skeleton is a maximum from the 15th century AD, and it accidentally fell into the layer of limestone, possibly during an earthquake, when a crack occurred.

As evidence, they point out that near the rock with limestone there was an old cemetery, as well as the fact that along with the skeleton, traces of sand were found in a block of limestone, as reported by Karl König.

Now, this skeleton may indeed be a 15th century skeleton. However, it is not proven to be so. It still could be of a much older age even of 28 million years old.