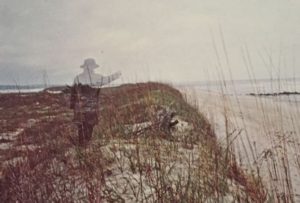 The Grand Strand is a group of islands off of the South Carolina Coast that is warmed by the Gulf Stream. It’s a resort for fishermen and women, sunbathers, golfers and people who just want to enjoy the beach. Pawleys Island is joined to the mainland by bridges.

The residents live in simple cottages. Originally, it was settled by rice farmers who built plantations there, although they knew of the hurricanes that would hit the island.

The identity of the Grey Man is unknown. Some think he is the apparition of Percival Pawley who was the first to settle on the island. The more popular theory is that he is the ghost of a Southern belles’ lover.

One of the problems with writing about and researching the paranormal is that, over the years, legends are made and there are different versions of the psychic phenomena and the identity of the ghosts are shrouded in history’s mists.

Whoever the apparition is, he was first sighted during the hurricane of 1822 when he appeared to warn the belle about an impending hurricane. There are also the ghosts of the Flagg family who, except for Dr. Flagg, a young niece and servant, Tom Duncan, died in the storm of 1893.

One version of the story is that a plantation owner’s daughter was spending the summer on the island, and awaiting the arrival of her fiancé. He returned safely, but, when he was taking a shortcut, his horse fell into quicksand. They both died.

She was devastated and began to walk the beach. One wind-filled day, she saw a man in grey approach her and recognized him as her dead fiancé. She ran to him, but before she could reach him, the ocean swept him away.

When her father learned about this, he took her to a hospital in Charleston. She was found to be sane. The next day, a hurricane hit the island, leaving death and destruction in its path.

Another version is that when she saw him, he told her to get off of the island immediately because there was danger. Then, he vanished. When she told her parents, they left the island the following morning. She was a sensible woman and did not have flights of imagination. That night, the hurricane hit. While most of the island’s homes were destroyed, theirs was untouched.

Another version is that he is the ghost of Plowden Charles Jeannerette Weston, the original owner of the house on the island, the Pelican Inn. He was born in 1819 and schooled in England where the family moved temporarily so he could have a decent education.

After the rest of the family returned to the island, Plowden stayed in England to attend Cambridge. He fell in love with Emily Frances Esdaile, one of his close friend’s sisters.

Mr. Weston was staunchly anti-British and disdained royalty. Emily’s father was a baronet. Plowden was afraid that his father would not approve of the marriage, so he sailed to Georgetown to tell him about the marriage plans. His father agreed to the marriage.

The couple married in 1847. They lived at Hagley Plantation, another gift from Plowden’s father. Off of the shore was Pawleys Island and the couple made plans to build a summer home there. This was when Pelican Inn was built. They built a chapel on the land that could seat two hundred slaves.

Plowden had Southern sympathies and when the Civil War began, he was company commander of the Georgetown Rifle Guard, Company A, Tenth Regiment. The couple entertained the men in his regiment and their ladies at the Pelican Inn. He developed tuberculosis and died shortly before the war ended.

There is another version as to the Grey Man’s identity. Mrs. Eileen Weaver owned the Pelican Inn for many years. She has seen the Grey Man, but believes the Grey Man is someone else. She identified him through a photograph taken in the 1800s.

The first time she saw a ghost, she and her cook were in the kitchen kneading bread. It was a ghost of a woman who wore a dress that appeared to be made of gingham and an apron. While the apparition was solid, Weaver knew she was a ghost. Sometimes, guests would see the ghost and, at first think she was a real person.

When Weaver saw the Grey Man for the first time, his appearance was sudden. He wore clothing from the 1800s. The two ghosts were often seen.

One spring during housecleaning, Weaver’s daughter-in-law Gayle was helping, cleaning the upstairs bedroom and the hall. Gayle found a comic book and began to read it. She felt someone tug her shirttail.

At first she thought it was someone playing a prank and ignored it, then she realized she would have heard footsteps, but had heard none. She put the book down and returned to cleaning. This type of phenomena happened frequently.

Julian Stevenson Bolick was a chronicler of the history of Georgetown and brought some old photos for Weaver to look at. Weaver identified the ghosts she saw as the Mazycks, cousins of the Westons who inherited the inn after Emily died. She believes the Grey Man is Mr. Mazyck. 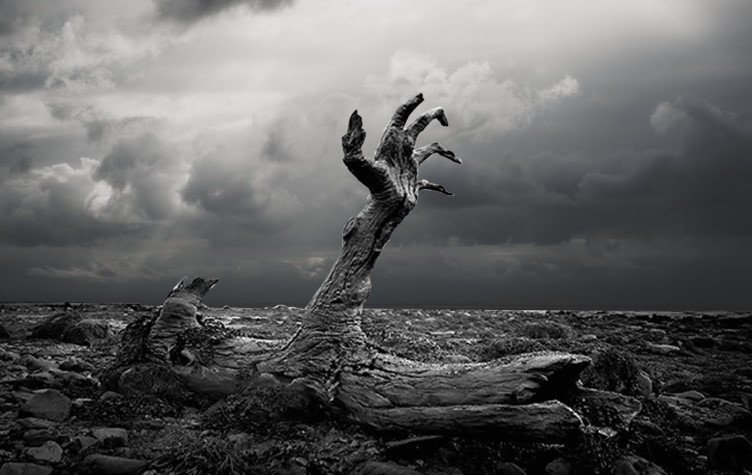 The final version is that a Charleston belle fell in love with her cousin, who had the reputation of being a scoundrel. Her parents were not pleased. Both sets of parents made plans to break up the couple. He was sent to France. He vowed he would return to marry her. Several months later, she was told he was killed in a duel. She married a widower and they lived on Pawleys Island from May to October.

The husband joined the army during the Revolutionary War and was fighting away from home in 1778. The wife was at the island. There was a hurricane that sank a brigantine off of the island’s shore.

All aboard were believed to have drowned. There was a knock at the woman’s door and, when she opened it, she saw her cousin whom she was told had been killed. He later went to the mainland where he died of a fever.

After this, when the husband and wife went to the island, she would see a grey figure by the dunes. When she got close enough, she saw he had no face.

There is no doubt that the Grey Man exists and warns people about impending hurricanes.

Sightings: He was seen during the hurricanes of 1822, which makes it doubtful that he is Plowden because of the dates. In 1822, he would have been a young child.

1893: the Grey Man appeared to the Lachicotte family. He was dressed totally in grey. He was silent; yet, they had heard of him and fled the island before the hurricane struck.

The Flagg family was not so lucky. Dr. J. Ward Flagg and his parents sought shelter in a tree during the height of the storm. His mother was washed away by the heavy surf first, then his father let go of his hold of the tree. The doctor’s brother, sister-in-law and five of their children also died.

Dr. Flagg never recovered from this and had told Tom that, when he walked on the beach, he heard his mother’s, father’s and other relatives’ voices talk to him. Some people have seen their misty apparitions and heard their cries.

In 1954, Bill Collins and his bride were honeymooning on the island. Around 5 AM, he herd someone knock on the door. At first, he ignored it, but then thought someone needed help and answered the trapping.

He saw a man in rumpled grey clothing and a grey hat pulled over his face, so Collins could not see his facial features. The man said the Red Cross had sent to to tell him to leave the island because a big storm was coming.

Collins could smell brine emanating from the visitor’s clothing. Suddenly, the man in grey disappeared. Collins heard the urgent tone of the man’s voice and he and his wife left the island. Then, Hazel thundered onto the island.

September 19, 1989: residents Clara and Jack Moore were waking on the beach. They saw a man dressed in grey who suddenly appeared, approached them, then vanished. Clara believes he was the grey man. The couple had packed and was ready to leave the island. Midnight, September 21, Hugo was the unwelcome visitor who caused massive destruction.

So, who is the Grey Man of Pawleys Island? Is he one of the possible people who were written about or was he some unknown person who died in a hurricane? And, does it matter who he is? It is documented that he does exist….