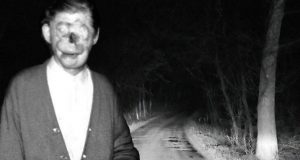 In Western Pennsylvania, you will probably hear of the Green Man Tunnel and the horribly disfigured ghost that is seen walking on the side of the road. According to legend, this is the ghost of a man who was struck by lightning… or doused with acid by an angry coworker.

There are dozens of variations, but in almost everyone the man glowed a strange green color. Supposedly, the stretch of road he was spotted on was the very same road all those years ago that he ran down to get help before succumbing to his injuries and entering the spirit world.

Locals who believed the tales would advise the more adventurous not to travel that road at night, lest one encounter the Green Man, but there were always those adventurous few who would defy the warnings and travel to the stalking grounds of the Green Man hoping to catch a glimpse of him.

Up until 1985… many of them had that encounter. They met the Green Man. Some of them reacted in terror… others would share a beer and some cigarettes with the creature of myth.

The Green Man wasn’t a ghost, obviously; he was very much real. His name was Raymond Robinson and he lived from 1910 until 1985, walking the roads at night and completely unaware that he was becoming a supernatural legend.

Raymond was only nine years old when he was electrocuted by a trolley line outside of Beaver Falls, Pennsylvania while attempting to view a bird’s nest. He wasn’t expected to survive as the accident had destroyed most of his face, but despite the expectations of the experts, Raymond pulled through.

His face, however, had been mutilated. He had lost both eyes, an ear, his nose, an arm and his skin was horribly scarred. Because of this, Raymond rarely went out in public due to his appearance and would only go out on walks after dark. People would call him the cruel nickname, “Charlie No-Face.”

Despite the fact that Raymond would hide in the bushes when he heard someone coming, talk began to circulate about the deformed man walking the roads at night. Talk turned into gossip and gossip turned into local legend. Imagine the surprise at the skeptics when they went to go find the Green Man only to actually find the Green Man!

Raymond would often keep away from people, perhaps afraid of the cruel few who would mock him, but often – in exchange for cigarettes or a beer – he would have a short conversation with those who encountered him and would even pose for pictures when asked. He was well liked by his neighbors and often enjoyed the company.

Because of his blindness and the fact that he only walked at night, Raymond was struck by cars on several occasions and, near the end of his life, he stopped his nightly walks all together, retiring to the Beaver County Geriatric Center where he passed away in 1985.

Raymond Robinson might be gone from this Earth, but the legend of The Green Man lives on. Stories and photos of Raymond eventually reached all corners of the world thanks to wars or simple travel.

Today, it is said that The Green Man haunts some railroad tunnels where he will use an electric touch to disable the vehicle of those foolish enough to park there to try and see him.

Obviously, the true story of Raymond Robinson has been twisted and distorted over the years and will only become more and more of a ghost story as time goes on and less and less of a story about a man dealing with a hard life. Still, you can’t help but marvel at the fact that, for a large part of the 20th century, an honest-to-God urban legend walked a lonely road in Pennsylvania.

Thanks to the myth that grew around him, he walks those roads even now.