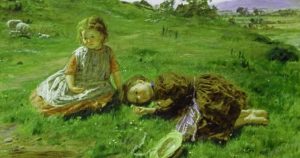 The two legends are separated by hundreds of miles and more than seven centuries but they remain one of our most tantalizing mysteries.

Let us look at the Spanish version first. According to the story, workmen were harvesting the fields near the village of Banjos in August, 1887 when they heard cries of distress. They found a young boy and girl huddling together in terror near the entrance to a cave.

They were screaming in a strange language. Their clothing was made of some sort of metallic material – and their skins were green. It was said that their eyes were almond-shaped and they had a slightly Negroid appearance.

The workmen did their best to comfort them and took them to the village where they left them in the care of one of the village leaders. Although they were obviously hungry they refused to eat bread or meat until they were offered uncooked beans which they wolfed down.

The girl began to thrive but the boy soon fell ill and died.

For five years before her own death, the girl’s skin began to lose its green hue and she learned Spanish. She had a strange tale to tell. She said that she and the boy, her brother, came from a sunless land of perpetual twilight where all the people were green.

They could see a land of light in the distance but it was beyond “great water”.

One day there had been a loud noise and she and her brother were “pushed through something”. They found themselves in the cave and followed the light to the cave mouth. She had little else to say of their experience and her death put an end to any further investigation.

Now let’s go back in time to England in the 12th century. The village of Woolpit, near Bury St Edmunds, Suffolk was surrounded by deep pits in which to trap wolves. Wolfpit may be the origin of the village’s name.

The story was first recorded by a priest, William of Newbridge who said he had originally dismissed it as fantasy but was eventually convinced by “the weight of evidence”.

According to the legend, a green-skinned boy and girl were found in one of the pits some time between 1135 and 1154. As with the later story, the children wore strange clothing, spoke an unknown language and would eat nothing but raw beans.

They went to live with a local knight, Sir Richard de Calne, and the boy soon died. However, unlike in the Spanish legend, the girl grew into womanhood and married. She worked as a servant for Sir Richard and was said to have been described as “wanton and impudent”.

Once she had learned English, the girl said she and the boy came from a twilight land. They could see a brighter country far off but there was a broad river in between.

So what do we make of it? Is it a tangled story of nature spirits, beloved of ancient folklore, which has grown in the telling? Were these children from some parallel dimension or simply lost and abandoned youngsters, real-life babes in the wood? Or maybe the Spanish version of events is simply a re-working of the medieval English story?