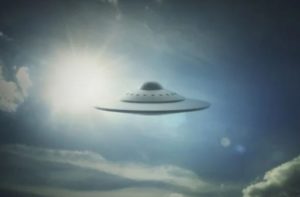 The town of Fargo North Dakota is most known as the setting of the classic film by the same name, but if the events of one cold night in 1948 were ever turned into a film it would have been quite different.

The skies over Fargo became the site of quite possibly the first interstellar fight between a known aircraft of terrestrial origin and something still unidentified.

The main protagonist in this story of mystery and intrigue was known as George F. Gormon. Gormon was a pilot of 25 years of age. He had served in air combat in World War II. He had the reputation of being a no-nonsense patriotic man who took his job seriously and had received several decorations while serving in the air overseas.

At the time Gormon was flying his plane with several other pilots in the National Guard when he suddenly spotted something. It was a clear night, and Gormon was still wanting to test out the capabilities of the P-51 Mustang he was sitting in the cockpit of.

Tipping his wings at his fellow pilots of the National Guard who had decided to land for the night, Gormon decided to take advantage of the clear conditions and log some additional flying hours. It was then that something strange.

Around 9:00 PM he flew over a football stadium where a high-school football game was being held. He noticed a small Piper Cub plane flying some 500 feet below him; otherwise the skies appeared clear.

Shortly after he noticed the Piper Cub, Gorman saw another object to his west. When he looked for the outline of a wing or fuselage he could see none; this contrasted with the Piper Cub, whose outline was clearly visible.

The object appeared to be a blinking light. At 9:07 PM Gorman contacted the control tower at Fargo’s Hector Airport and asked if it had any air traffic in the area other than his P-51 and the Piper Cub.

The tower answered that it did not, and it contacted the Piper Cub pilot, Dr. A.D. Cannon. Cannon and his passenger answered that they could also see a lighted object to the west.

It was a mysterious object due west of him hovering in the sky. Gormon looked closely to see if he could spot any emblems or signs of make or model. He found none. In fact, the thing didn’t even have so much as a fixed-wing on its side.

It had no propellers, no logos and no clear sign of nationality. Naturally, Gormon was alarmed. He radioed back to the base to see who might be up there with him. The control tower at Fargo stated that only a Piper Cub was in the area.

Gormon clearly saw the Piper Cub travelling due east at a lower altitude than him, completely separate from the object. It was at this point Gormon decided to radio the control tower and inform them that something was in the air up with him.

Looking to the west of the control tower, everyone on the ground stated that through binoculars they could confirm that there was indeed an object of unknown nature flying west of Gormon.

And that’s how it began. Quickly Gormon broke off and pursued the object after it did not respond to radio contact. The Mustang he was flying was capable of a top speed of somewhere around 400 miles per hour, and he knew he would be able to catch it if it was anything made either in the United States or overseas.

Strangely, the object then veered off and turned, quickly accelerating far beyond his reach. As it turned and began navigating around him, Gormon cut at a 90-degree angle and attempted to cut the object off. It once again quickly outmaneuvered him.

It was at this point that Gormon decided to once again pursue it directly and it seemed the object was more willing to let him get close. Unfortunately, it seemed to be getting too close.

The mustang and the object almost collided as the fast-moving light quickly accelerated toward him and flashed light filling up the cockpit and nearly blinding Gormon. Just before the two vehicles were about to collide, it suddenly shot up nearly a hundred yards into the sky. 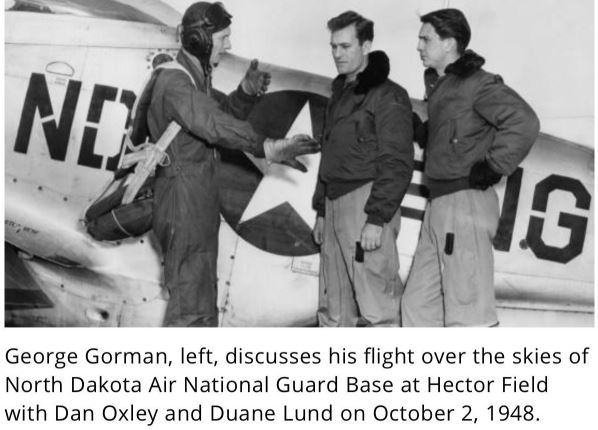 Shortly after that, it was gone. This was all observed on the ground as well as by Gormon himself. At this point he broke off the chase; it was 9:27 PM. He flew back to Fargo’s Hector Airport.

Within a few hours, military officers from Project Sign arrived to question Gorman and the other witnesses. Project Sign had been created by the US Air Force in late 1947 to investigate UFO reports.

The officers interviewed Gorman, Dr. Cannon and his passenger, and the control tower personnel at Fargo’s Airport. The officers also checked Gorman’s P-51 Mustang with a Geiger counter for radiation. They found that his Mustang was measurably more radioactive than other fighters which had not flown for several days.

The official explanation eventually labeled the encounter as the planet Jupiter – later Project Blue Book changed the story and labeled it “solved” by saying it was just a particularly maneuverable glowing weather balloon.

The Gorman dogfight received wide national publicity and helped fuel the wave of UFO reports in the late forties.

Flying Triangles in 1965: These Bizarre Objects Are Not Ours

1st Officer William B. Nash: We Flew Above Flying Saucers