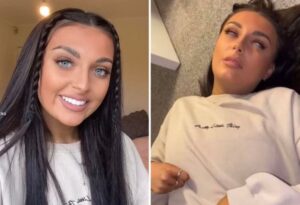 In Britain, there is a girl who resembles the heroine of the movie “50 First Kisses” – she suffers from serious memory problems, reports DailyMail.

21-year-old Megan Jackson was diagnosed with a functional nervous disorder. A girl should not experience vivid emotions – if Megan watches a film that arouses strong feelings in her, or just laughs, she will have an epileptic seizure.

Also, when she is happy or excited, she may experience numbness in her limbs, headaches, inability to speak, and loss of consciousness. After such attacks, the girl has memory lapses.

For the first time this happened to her at the age of 17 – Megan suffered 35 epileptic seizures in a day. Mom then called an ambulance for her, she was taken to the hospital. The cause of this disease is unknown.

When a girl regains consciousness after seizures, she cannot remember anything. Megan does not remember the names of her relatives and their dates of birth, and also forgets about having friends.

Speaking about her condition, Megan said: ‘The most bizarre thing is I can wake up and forget I like certain foods. I’ll buy something then the next day think “why did I buy this – I don’t like that?”.

To help Megan, her partner Tara keeps a diary in which she talks about the latest events, as well as takes photos and videos.

Megan admitted that ‘everyone’ likens her condition to film 50 First Dates, starring Adam Sandler and Drew Barrymore, which sees a woman suffering from short-term memory loss and starting her life afresh every day.

For health reasons, Megan cannot even take a bath unattended, as well as walk alone and drive a car. One day she forgot that she had been fired and began to prepare for work. At the same time, Megan does not receive benefits, and her treatment costs a lot of money.