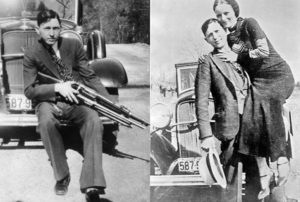 Bonnie Parker and Clyde Barrow were two of American’s most infamous gangsters during the Great Depression of the 1930s. They both came from desperate poverty and both had an utter contempt for the authorities and the law.

Bonnie Parker was married at the time she had met Clyde, she had met her husband Roy Thornton in her second year in high school. They dropped out of school and were married on September 25, 1926, six days before her 16th birthday.

Their marriage, marked by his frequent absences and brushes with the law, was short-lived. After January 1929, their paths never crossed again. However, they never divorced, and Bonnie was wearing Thornton’s wedding ring when she died. Thornton was still in prison when he heard of her death. He commented, “I’m glad they went out like they did. It’s much better than being caught.”

Shortly after Bonnie’s first meeting with Clyde on January 5th, 1930 at the home of Clyde’s friend Clarence Clay, Clyde was sent to jail for burglary. Bonnie managed to smuggle a gun to him and aided his escape. But Clyde was recaptured and served a 12-month sentence in Eastham prison where he killed a man that had raped him. After he was released from prison in February 1932, he and Ralph Fults assembled a rotating core group of associates.

The two of them began a series of small robberies, primarily of stores and gas stations their goal was to collect enough money and firepower to launch a raid against Eastham prison and free some of their friends. On April 19, Bonnie Parker and Fults were captured in a failed hardware store burglary, where they intended to steal firearms, in Kaufman, Texas, and subsequently jailed.

Bonnie was released after a few months when the grand jury failed to indict her, but Fults was tried and convicted and was never to the gang.

Once out of prison, Bonnie again linked up with Clyde, but by then, Bonnie knowing Clyde would probably end up dead vowed to die with him. The couple spent the next 21 months on the road, with others who became known as the Barrow’s Gang. They quickly moved from petty thievery into bank robberies, kidnapping and murder. It is stated that Bonnie didn’t shoot anyone but that she would reload Clyde’s guns.

Their crime spree spanned the rural parts of Texas, Oklahoma, New Mexico and Missouri. The “yellow press” at the time romanticised the pairs’ exploits and to many Depression era Americans they became a badly needed form of entertainment. But the reality was Bonnie and Clyde carried out ruthless bank and store robberies which sometimes resulted in the kidnapping or wounded of their victims.

Clyde and various gang members murdered 13 people, nine of whom were police officers. The pair actually didn’t live up to their glamorised image, but they did leave a blood bath in their wake.On January 16, 1934, clyde orchestrated the escape of Raymond Hamilton, Henry Methvin and several others in the infamous “Eastham Breakout” of 1934. The brazen raid generated negative publicity for Texas, but during the jailbreak, escapee Joe Palmer shot prison officer Major Joe Crowson. This attack attracted the full power of the Texas and federal government to the manhunt for Barrow and Parker.

As Crowson struggled for life, prison chief Lee Simmons reportedly promised him that all persons involved in the breakout would be hunted down and killed. All were, except for Henry Methvin, whose life was traded for turning over Bonnie and clyde over to authorities.The Texas Department of Corrections contacted former Texas Ranger Captain Frank A. Hamer, and persuaded him to hunt down the Barrow Gang, a job he fully intended to see result in the deaths of the now infamous pair.

In the end it was one of their own gang members that betrayed them, Henry Methvin. In May of 1934 the couple were driving a back wooded road near their hideout at Bienville Parish, Louisiana when police officers from Texas and Louisiana setup a roadblock near Gibsland, Louisiana. These five officers ambushed the stolen car Bonnie and Clyde were in and within minutes the car was riddled with over 100 bullets. Bonnie got her wish to die with her beloved Clyde, her body was found dead slumped over Clyde’s. The two bodies were towed from the site still in the car.

Before this was done however, onlookers managed to snip hair and other souvenirs from the bodies. One man even tried to cut off Clyde’s ear and trigger finger but the officers managed to stop him. Since their deaths many people claim their ghosts still remain.

The most active of these hauntings is at the site in the wooded area near where they were shot and killed in Louisiana. Today a weather worn marker is placed at the spot were Bonnie and Clyde’s car rolled off the road. Many visitors to this spot have reported strange anomalies and mists showing up in their photographs. Most state that these strange lights appeared in just one of the many photos they took.

The car itself is also considered haunted by their ghosts. For 30 years this blood splattered,bullet-ridden V8 Ford “Death Car” as it is known, was a popular attraction at carnivals, amusement parks, flea markets and state fairs. It is estimated that it made it various owners millions of dollars.

Today the car is displayed in a room along with Clyde Barrow’s bloodstained, bullet holed shirt at Whiskey Pete’s Casino in Primm, Nevada just across the border from California.Several people who have viewed the Ford over the years state they got a creepy unnatural feeling as they stood near it. Yet again, many people who have taken photographs of this car have picked up strange anomalies in their pictures.

One hotel that Bonnie and Clyde stayed at for several nights during their crime spree was the Baker Hotel in Mineral Wells, Texas. It is stated they haunt two specific areas of the hotel, the Brazos Room and the Ballroom. Some feel their ghosts are still present because they are reliving fond memories. Others say that it is several objects the hotel owns that keep their ghosts active.

For the hotel once had Bonnie’s 38 revolver on display as well as photographs of her and Clyde. The hotel also once displayed a poem that Bonnie wrote for Clyde. The Bonnie and Clyde Ambush museum in 2419 Main St. in Gibsland is also reportedly haunted by the ghosts of Bonnie and Clyde. Paranormal groups from the through the state and the country, visit the location on a regular basis.