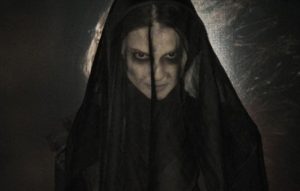 Fort Warren, built on George’s Island, was completed in 1850. The granite fort is shaped like a pentagon and contains barracks, ammunition and storage rooms, kitchen, mess halls, a hospital, jail cells and heavy guns facing seaward.

During the Civil War, the site served as a prison for Confederate soldiers and disloyal Yankees. Alexander Hamilton Stephens, Vice President of the Confederate States of America, was probably the most famous person to be imprisoned there.

Lieutenant Lanier was among the Confederate soldiers General Burnside captured at Roanoke Island and sent to the prison at Fort Warren. Lanier sent a message to his wife that gave her directions to the prison and a prearranged signal for announcing her arrival.

When Mrs. Lanier received the letter, she felt compelled to journey there and free him. She traveled from Georgia to Hull, Massachusetts, about a mile from the fort and found shelter in the home of a Confederate sympathizer. Mrs. Lanier had cut her hair and obtained men’s clothing for her final destination and meeting with her husband.

Daily, she observed the fort with a spyglass. She chose a stormy January night to row to George’s Island. She took an old pistol and a pick-axe with her.

After she landed on the beach, she slipped past the sentries and gave her husband their signal and was hoisted up to meet her husband, then hidden by the Confederate Soldiers.

How Mrs. Lanier Became the Ghostly Lady in Black

The Confederate prisoners planned to dig a tunnel to the center of the fort, then overpower the guards and seize their weapons. The prisoners made a slight miscalculation in the tunnel’s route which enabled the Union soldiers stationed on the other side of the wall to hear their digging.

Commanding officer Colonel Justin E. Dimmock was notified immediately. The prisoners had piled the excavated dirt into the Corridor of Dungeons. As the prisoners appeared there, each one was taken to the dry moat. Several were unaccounted for, so Dimmock yelled into the tunnel for them to come out. A new plan was hastily formed.

Dimmock raised his hands, apparently in compliance, and approached the woman. Suddenly, he hit the gun’s barrel and it exploded. A fragment killed Lieutenant Lanier.

Mrs. Lanier was sentenced to be hanged as a spy. Her final request was that she be buried in woman’s clothing. The only women’s garments that could be found were old black robes that had been used by the cadets in a play. She was hanged and buried next to her husband on George’s Island.

Encounters with the Ghostly Lady in Black

Over the years, there have been multiple reports of paranormal sightings involving the ghostly woman in black.

A sergeant from Fort Banks was climbing to the top of the ladder which leads to the Corridor of Dungeons when he heard a voice warning him not to go in there. He didn’t.

Four officers were walking under the sallyport at the entrance to the fort and saw five isolated imprints of a woman’s slipper the fresh snow.

There are records of soldiers shooting at spectral forms while on sentry duty.

A man who was court-martialed for deserting his post, claimed he was chased by the Lady in Black’s ghost.

Soldiers had regular poker games in the old ordnance storeroom. One night, a stone rolled down the length of the room on its own volition. This stone’s rolling was repeated on subsequent nights.

The whole island is currently a very famous recreational place with excellent views of the islands, the skyline of Boston and the Atlantic Ocean. And only a few who happen to be there know what dark secret this place hides…

Haunted Fort Laramie and Legend of the Lady in Green