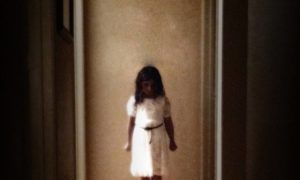 In the mid 1800s, there was an 8-year old girl named Abigail Townsend who lived in the Spooner House in Plymouth, Massachusetts. Her father was a fisherman and he was away at sea most of the time.

Abigail never had a good relationship with her mother, but whenever her father left, things got much worse. Her mother became very abusive and Abigail always feared her father leaving because she was afraid of what her mother might do.

One day, Abigail’s father failed to return from one of his fishing trips. Abigail’s mother blamed the poor girl for her father’s disappearance and took her anger out on the child.

One night, poor Abigail died under mysterious circumstances. Her mother claimed that it was a bad tooth that killed her daughter. She claimed that Abigail’s toothache turned into an abscess and the infection spread throughout the child’s body, killing her, quite plausible as it was in the days before Penicillin, but many people refused to believe her story.

They suspected that Abigail’s mother had brutally murdered her own daughter, stabbing the little girl to death in a fit of rage.

Ever since that time, the ghost of little Abigail has haunted one of the upstairs bedrooms in the Spooner House. Many people claim to have seen her ghostly figure peeking out of the top window and playing with the window shutters.

The Spooner House is now a museum. In August of 2005, a group of workmen were hired to do repairs at the Spooner House in Plymouth, Massachusetts and upon arriving, knocked at the door. A little girl in colonial period costume opened it, which surprised no one as the 265 year-old house has been a museum for over 50 years.

Later on, when the curator arrived, he was shocked to see the workmen already inside and asked the foreman who had let them in. He shrugged and said, “The little girl did.”

“What little girl,” the curator asked. The workmen led the curator to the room which the little girl had entered, only to find it, as well as the rest of the house, empty. The workmen, not used to encountering ghosts in broad daylight, immediately packed up their tools and promptly left.

One woman, who used to live in the house next door, said she woke up one night to find Abigail standing at the foot of her bed.

According to the legend, if you stand in the street in front of Abigail’s house and say “Abigail, come play!” you will see the ghostly figure of the little girl standing in the upstairs window.

The Skirvin Hotel and its Ghostly Secrets