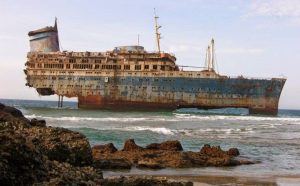 Fuerteventura is the Eastern most island of the Canary Islands and the least of all the tourist islands within the major islands of the group. Along the island’s South Eastern shore there are no roads and no towns.

In fact the closest town is the small village of Pajara, ten kilometres inland. All of this may explain why for the last twenty years the stretch of coast has been home to the untouched wreckage of a 700ft ocean liner, but despite its allure the wreck has been untouched for much different reasons. Welcome to the SS America…

Built in 1940 the SS America was an ocean liner intended to be a middle class carrier of immigrants, but as World War Two progressed she would carry no less than eight names and bare the flags of three allied countries to avoid tracking by the enemy, but switching flags and names will only help so much, especially when you have Nazi spies on board.

In 1941 the SS America was purchased by the US Navy for troop transport, and until this time its history and reputation were fairly uneventful, but then the Navy made a major error and chose to keep the ship’s original engine and service crew on as there was little resources for training and little time.

Amongst the members of the crew were Franz Joseph Stigler and Erwin Wilheim Siegler, two high ranking Nazi spies who would soon become assassins.

America the ship began to adopt a reputation of being cursed; accidents would happen far too often and crew would be injured or killed. Crew that vanished were assumed to have fallen overboard.

It wasn’t long before the ship’s reputation began to shift to that of a full-fledged ghost ship; even Siegler began to break down, reporting that he had witnessed phantoms of his victims walking the lower decks. This would eventually be their undoing.

The spies were discovered and delivered to America where they would stand trial, but it was too late for the SS America. The ship was already in the grips of the spirits of those murdered on board. Accounts from witnesses and rumours from those that had heard the stories of the haunted ship grew to a point that the Navy formally renamed her the USS West Point and repainted the entirety of the ship to change its appearance.

Despite the haunting and rumours the USS West Point survived the war without any major tragedies. Post war she was once again renamed the SS America and would resume her New York-Le Havre-Bremerhaven-Cobh route, but it could be speculated that the spirits of dead soldiers and sailors were not happy with this as the accounts of paranormal encounters increased significantly for the next twenty years. 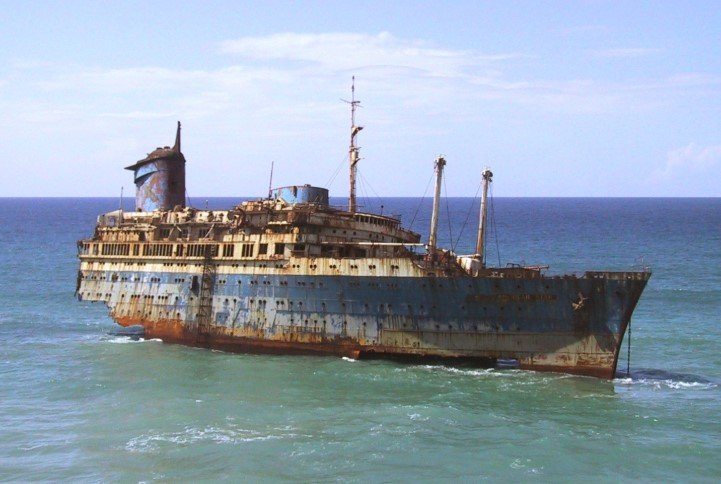 If its crew of ghosts weren’t happy with that, they certainly weren’t happy with the ship’s retrofitting to become a Thai hotel in dry-dock off the city of Phuket. With the engines and propellers gutted for resale the SS America would be towed by the Neftegaz 67 from her current station in Greece to Thailand.

Not soon after leaving dock the two ships would be pulled into the course of a major storm; the crew of the Neftegaz reporting that SS America had hit an undertow and inexplicably pulled them off course.

Later in the voyage the tow lines would snap, and six men would be sent aboard the SS America to repair the attachments. Do I need to say that all six men died aboard the SS America? They did, and in response the Neftegaz sent a far larger group to attempt corrections, but they failed as well.

In 1994 the SS America saw its final day at sea and wrecked on the rocky coast of Fuerteventura where she would slowly be swallowed into the sea as the hull disintegrated into rust.

Today the shipwreck of the SS America is only visible in low tide, but since that day at sea the story has been told that the ship came alive and fought the Neftegaz 67 for its freedom and won.