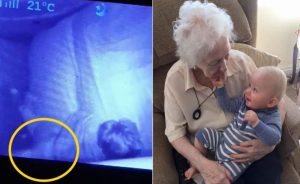 Someone’s ghostly hand gently stroking the child, was captured on the screen of the baby monitor (see video below). Baby’s mother believes that it was the ghost of a recently deceased grandmother who loved her grandson very much.

When, on April 3, 2019, 28-year-old Carrie Waterworth saw something whitish and stretched out next to her 5-year-old son Ellis, on the screen of a baby monitor, she decided that it was a spider on the web.

The woman immediately ran into her son’s room, but when she looked at everything near the child, she did not find any insects or traces of cobwebs there. Carrie considered it just a malfunction and went down to the first floor.

But soon she saw again the same whitish object on the baby monitor and this time she suddenly realized that it looked like a hand. This hand gently stroked the boy’s stomach and upper part of the head and then disappeared again.

Ellis was diagnosed with autism and because of it, the boy upset very often and it is difficult to calm him down. According to Kerry, the ghostly hand stroking the child seemed to try to calm him down. It seems that it had its effect – the boy after this phenomenon slept quietly and calmly.

Now Kerry is confident that the ghostly hand belonged to the deceased grandmother Elizabeth Gooch, who loved her baby very much. Grandmother passed away in 2016.

“I wasn’t scared to realize that it could be a ghost, I was more intrigued, and it also had a consoling effect on me. However, I’m still a bit shocked, I believe in ghosts, but I used to be very skeptical of all ghost videos. However, when I saw it myself, it made me believe.”

In search of cobwebs from the alleged spider, the woman even rubbed the walls next to the crib but found nothing.

“Ellis has autism disorder and he sleep very restlessly, he can sleep for a long period without awakening very rarely. After I saw a calming down hand on the baby monitor, he woke up only half an hour later, this has never happened before.”

According to Kerry, the grandmother really loved Ellis and played with him and reassured him often. She understood that this was a child with a disability and was always worried about him. When Kerry posted this video on the Internet, many commentators also understood that it was not an insect, but really someone’s hand that gently strokes the child.

“Many people wrote that they had warm feelings from this video. Others were shocked, and a small part wrote that it was just dust. I myself have never seen ghosts in our house, but now I will be on the alert.”