Just over the bridge from Marlow, is an old stone Abbey with its pointed gables facing the River Thames. This is the famous Bisham Abbey built in 1337. Previously it was known as Bisham Priory where the Monks resided. It is said that when King Henry VIII disolved the Monasteries, the Monks were so annoyed they cursed anyone who bought the Abbey.

Steeped in history, it is a spooky place with an eerie atmosphere. It’s not surprising that it is said to be haunted. it has known Anne of Cleves, Oliver Cromwell and Elizabeth I. Ancient flags adorn the walls, and a portrait of Dame Elizabeth Hoby hangs in the great hall. Take a look at her picture. This is the famous ghost of Bisham Abbey, known locally as the Grey Lady.

Over the years there have been many sightings of the Grey Lady ghost. I remember a story that my mother told me about the Second World War. She was a Sergeant in the W.A.A.Fs, and worked mainly as a telephone operator.

She was a practical woman who had no time for ghostly tales. Being given what she called the Graveyard Shift, she walked through the Abbey to get to her station. The windows didn’t have curtains at the time, and from where she was positioned, she could see out over the grounds, and in the distance the river glowed faintly in the moonlight. One night as she took her seat, she noticed out of the corner of her eye, a mist coming in over the grounds.

She took no notice and carried on with her work. Suddenly she heard an intake of breath and looked towards the other girl who was sharing the shift. The girl was pointing towards the window. Outside the mist had taken on a shape. The form slowly glided by the large window, and to my mother’s eye she saw a woman take shape, her hands out in front of her. The ghostly woman drifted away across the fields and disappeared.

In the last few months of the War, my mother had been priviledged to see the ghost of the grey lady. When I asked her what happened, she had a far away look in her eye and said, ‘ We saw something that night and it made the hairs stand up on the back of my neck. I don’t believe in ghosts, but at that moment I wanted to walk out of the door, and get a strong drink’.

Of course being in the Airforce you can’t just walk away when you get to see a ghost! So they carried on working, and never mentioned it to anybody, not even each other.

Elizabeth Hoby was born in 1528 and died in 1609. She was a highly respected member of Queen Elizabeth’s court. Known for her poetry and musical talent. On the 27th June 1558, she was married to Thomas Hoby of Bisham Abbey in the county of Berkshire England.

Thomas was a noted translater and in 1566 he was Knighted and became the English ambassador to France. The couple moved to Paris, but sadly Thomas died shortly after.

Elizabeth had four children, two girls who died in childhood, Edward and another boy who was born after her husbands death, who she named Thomas in memory of her husband.

Later, she married for the second time. Her husband was Lord John Russell. She had two more daughters named Elizabeth and Anne.

This is where it starts to become confused. Its said that Elizabeth had another son, William. Wanting all her children to become successful, Elizabeth became angry because William was a disappointment to his mother. 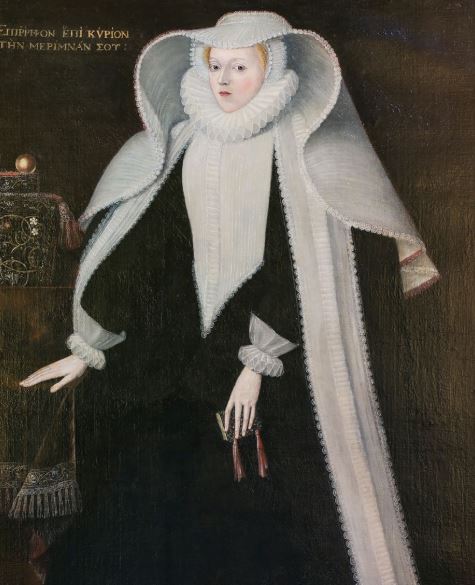 He couldn’t read or write to her standard, and in a fit of anger she is said to have hit him so violently that she killed him. Strangely, there is no record of him in geneology records. But that doesn’t mean he did not exist. Records back then were very patchy, especially if he died before records about the family were written.

Another explanation could be that as Elizabeth’s family were so influential at the time, somehow they managed to cover up the secret. Whatever the reason, Elizabeth is said to be so full of grief and remorse, she continues to search for her son.

And that’s why she haunts the Abbey. Her ghost appears, weeping and wailing, desperately washing out the blood from her hands in a bowl of water that eerily appears in front of her.

Ghostly Sightings of the Grey Lady

Of course you could dismiss the whole story as legend or fake but for one thing that happened later. In 1840 new evidence came to light, showing that the stories may be true. Part of the Abbey’s dining room floor was taken up during alterations, and among the rubble they found old papers.

What’s more exciting was the fact that these paper’s contained Elizabeth’s Copy books. The books contained lots of writing by the Hoby family. In fact a lot of it were corrections by the ghostly Dame Hoby herself!

Mrs East who was renting the house at the time decided in her wisdom to leave the books alone until she could get them verified by the Abbey’s owner.

Once again a strange thing occurred. Soon after the discovery, the paper’s went missing. Evidently the builders decided that they could make a pretty penny out of them and stole the lot!

The Ghostly sightings are still very much a part of Bisham Abbey and throughout the last few hundred years there are been many sightings of the Grey Lady.

One of the most chilling accounts comes from late 19th Century.

Admiral Edward Vansittart, a sailor, came face to face with the famous ghost. Playing chess with his brother late one night in the panelled room where the Dame’s portrait hung, he had finished the game, and his brother decided to retire to bed. Edward stood in the room with his back to the portrait mulling over his day.

He soon became aware of a presence behind him, and turning, he saw Dame Elizabeth standing there! He looked across at the painting, and to his horror there was nothing on the canvas. Terrified, he ran from the room.

Another account concerned two boys on their way back from a fishing trip at dusk. They were scared half to death when they saw a boat by the bank of the river. In it was an old woman, huddled in her black cloak. The boys didn’t wait to see if it was Dame Hoby!

Every summer There is a Regatta at nearby Henley, usually two weeks after the Marlow event. On one of these occasions, Bisham Abbey was crowded with visitors getting ready for the Regatta. So one young man stayed in the library and got ready to go to sleep. During the night, he felt someone touching his hair, and waking up abruptly he saw to his horror the spectre of Dame Hoby. Softly she spoke these words to the terrified boy:

‘Young man, if I touch thee, thou will be bald’!

With the light of dawn approaching, the young man fled Bisham Abbey, and in a bizarre twist he soon became a clergyman. How’s that for a convertion to the faith!

In another strange case, a young girl was was staying at the Abbey and after going to bed to read, she noticed that her dog started to get agitated. His hackles were rising and he leapt of the bed with a yelp and ran from the room.

To the girl’s astonishment, she suddenly noticed that her watch that had been placed on the bed, started to rise in the air! Then it shot across the room, as if thrown by a ghostly hand!

Then sheet music was thrown about, and her Toilet Set, or vanity case was knocked over. But that wasn’t all. The curtains of the bed were wrenched open and standing there in front of her, was a woman wearing what appeared to be an old fashioned nightgown. In a state of shock, the girl ran from the room and downstairs, where after she told her story, she was shown the portrait of Dame Elizabeth. The girl recognised her from the sighting.

One of the strangest things about the ghostly sightings, is that she sometimes seems to appear in the negative. For example her headdress, ruff and frilled sleeves are always black, and her gown is white.