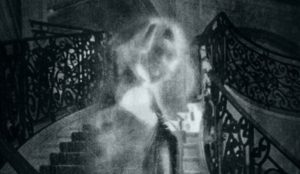 Lady Dorothy married Lord Charles Townshend when she was 26. He was a widower. Legend has it that she had been Lord Wharton’s mistress. Charles discovered this after the marriage and had her locked in an apartment in the mansion.

Her cause of death is unknown and the legends vary. Different versions say that she died of a broken heart, smallpox, falling down the stairs or starvation. Fodor doubts that she died of starvation because Lady Townshend told him that forced starvation in the 1600s in the area was not possible unless Dorothy was on a hunger strike.

There was a portrait of her that hung in the hall. She wears a brown brocade dress that is trimmed in yellow with a ruff around the throat. She has large shiny eyes. According to legend, the portrait is normal when viewed in daylight. When seen in candlelight, there are no eyes, just dark hollows.

In the early 1800s, George IV, then regent, visited Raynham and was given the State bedroom. He woke in the middle of the night to see a woman, wearing brown, hair disheveled and a very pale face standing beside the bed. He was very frightened and said he would not stay in the home another hour.

At Yuletide, 1835, Colonel Loftus was a guest at the manor. He saw the Brown Lady on two succeeding nights.

The first night, she was standing outside of Lady Townshend’s room. He chased her and she vanished. The second night, he saw her on the stairs. She was carrying a lamp. She wore brocade and a tight fitting cap on her hair. Her eyes were empty hollows.

Shortly after this, Captain Frederick Marryat, a novelist, was a guest at Raynham. One night he and two of Lord Charles’ nephews encountered her in a hallway. She held a lit lamp and grinned at Marryat. He felt the grin was evil.

He had a pistol and shot at her. She vanished. He vowed that the bullet passed through her. It was found in the door that she had stood in front of.

The Brown Lady was not seen until 1926 when Marquis Townsend and one of his friends saw her when they were boys.

In 1936, Lady Townshend hired photographers Indra Shira and Captain Provand to take pictures of the hall. Shira saw a misty figure take form on the steps until it was shaped into a woman who appeared to be wearing a white draped garment.

The ghost began to walk down the steps. Shira told Provand to take a picture and pointed in the direction of the phantom.

Provand did not believe the man had seen a ghost. He saw nothing. He and Shira made a 5 pound wager that the ghost would appear on film. Provand lost. The Brown Lady was in the picture dressed in something resembling a wedding gown and veil.

The picture was in the December 1, 1936 edition of County Life magazine. The photograph had been examined by experts and no evidence of fraud was detected.

The Brown Lady is also believed to haunt Houghton Hall. This is the home her brother built on the site of the ancient family home. It is said that she spent her happiest years there.
Dr. Nandor Fodor wrote about his experience at Raynham.

He states that one of his childhood ambitions was to be frightened by a ghost. He stayed in the Monmouth Room at the hall, in front of the staircase where the Brown Lady has been sighted. The room is named after the Duke of Monmouth who slept there.

Ghosts can be contrary. They do not always oblige investigators with their presence. This was the case with the Brown Lady.

The Duke’s ghost was seen by a relative of the Townshend’s, a spinster. She woke to see him smiling, standing by the foot of her bed. She was not frightened, but curious. He bowed, and then disappeared into the shadows of the wall opposite. It was one of the lady’s happiest memories.

Fodor was, according to him, in “an odd room in a monster bed.” He was tense. He heard noises, but they were not paranormal.

Then, he heard thuds. There were muffled sound coming from the ceiling. They sounded like a man with a clubfoot walking. Next, he heard clanks and thought these were pots and pans. Then, there was rumbling and squeaking as if furniture on castors were being moved. These rolling noises were short, but clear. It sounded like somebody was moving furniture above his bed.

He remembered that Lady Townshend’s mother was ill and thought the sounds could be the night nurse serving food on a table.

The noises did not stop. When Fodor fell asleep, they would wake him. At about 5 AM, they became muffled. He decided to investigate.

Fodor walked down the haunted staircase. He felt cold hostility in the air and was inwardly chilled. He went up to the floor above his bedroom. He came to a landing where a light burned.

There was light under the doors of the rooms. He thought that, at any moment one would be opened and he would be asked what he was doing, so he went back to his bedroom.

When he returned to his bed, there were three soft thuds at the opposite side of the room. Then, he heard thumps, more thuds, creaks, screeches and clangs. There was banging from the ceiling.

The next morning, he asked his wife and daughter who slept in the adjoining room, if they heard anything. They heard a clatter from the floor above, but did not notice it much.

Arthur Kingston, a fellow investigator who slept in a room farther away, when queried by Fodor, said he had heard nothing.

Then, the intrepid Fodor talked to the butler. The man assured him the room was empty.

Fodor told the butler about the noises that had plagued him. There had been a lot of moving things about.

The butler replied that it must have been the old lady, a 90-year-old guest who arrived from Scotland. She was still sleeping. Fodor wanted to interview her, but he had to leave Raynham.

He wrote a letter to Lady Townshend inquiring why the old lady would be moving furniture, clanking pots and pans, thumping and banging. He heard from her, but there was no answer to his question. Fodor thought she might have mistakenly believed he was complaining.

Lady Townshend wrote a book. Fodor found his answer there. She discussed the old lady, mentioning her name. The old lady told her that she had heard noises in the bedroom next to hers late at night. She believed the servants were having “revels” there and Lady Townsend should talk to them about this.

Lady Townshend wrote that none of her servants could have been responsible for the noises. It was the ghosts of Raynham Hall who created them.

Fodor thought it strange that the servants blamed the old lady for the noises while she blamed them. He was convinced that the noises that disturbed him the night he spent in the Monmouth Room was not the meandering and ramblings of the old lady.