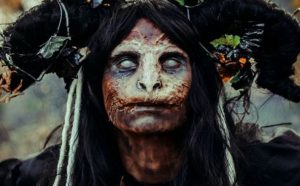 This story is completely true. I’ve been studying witchcraft for 5 years now and I have encountered a lot of weird things. It all began one night when my friends told me a story about how there was this witch and she was murdered at Pepper Park Beach in Ft. Pierce, Florida where I live.

Later on that night I decided to go and do a seance with 3 of my closest friends at the very same beach. Now don’t get me wrong because this beach is closed off by trees that have fallen and you have to walk through a little forested area to get to the beach, I admit I was a little creeped out by this.

When we were about halfway through the forest it began to rain and my friend Maria asked if we could turn around. I said it would be ok as long as we came back tomorrow night and when we turned around to leave a tree fell right in front of us (we missed it by 4 inches) then my friend Maria said something doesn’t want us to leave so Maria talked my friend Jennifer into letting us stay while she waited in the car and listened to music or whatever.

When we were almost through we started to hear things in the bushes, it sounded like someone or something was following us; so we started to run. When we finally got there and gathered our thoughts we began our seance. We felt a presence with us and I asked the spirit if she could make her presence known so it started to rain harder, I knew that that was our sign.

We continued our seance for about an hour then we stopped for no apparent reason but something told us to stop. When I looked up I noticed a womanly figure standing about 7 feet in front of me and it told me to go help my friend.

So I and Maria took off to see what was wrong with Jennifer and when we got there we seen a man standing by the car door window harassing Jennifer. We stopped and hid in the bushes then I slowly walked up behind the car and hid while Maria confronted him.

Maria had asked him to leave several times and he refused so then I walked out from behind the car and when he saw my pentagram around my neck he said: “So your all are into this devil worshipping stuff?”

I just let my eyes roll back into my head and I started to talk in Latin and the man just left.

If it wasn’t for the ghost I wouldn’t have known that Jennifer was in trouble and she could have been killed because in the newspaper the next day there was a picture of a man that raped a young girl that was broken down on the side of the road and he attempted to murder her until a cop pulled over to look at her car and he got caught.

Sure enough the picture in the paper was the man that I and Maria had to chase away from Jennifer.