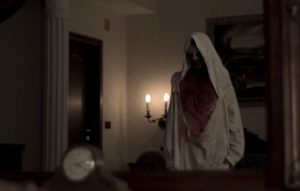 I moved into a cute little granny flat with my four year old daughter and things seemed normal in the beginning. About a month later I started noticing strange occurrences around the house. I often felt like I was being watched. Sometimes I would hear someone call my name and when I looked around, nobody was ever there.

I placed a picture on the wall, over the dining table, and at least twice a week, the photo would just fall off of the wall for no good reason. I checked the nail in the wall and the picture just to make sure something wasn’t loose. Everything was fine.

One afternoon as I was washing the dishes I felt something rush by me. I jumped back thinking it was one of my cats but there was nothing there. I looked outside and my cats were in the parking lot lying down.

I went back to washing the dishes when I heard a sound to my left. I looked around and didn’t see anything but I felt it. I called out, “What do you want?” A second later the painting came off the wall and crashed to the floor. I guess I got my answer.

Now I was mad because I just bought the glass frame and it was broken. I put up a new photo of the Beatles, and from then on, the picture never moved again. I guess the ghost liked the Beatles as much as me.

From then on, many things started happening on a regular basis. My daughter started getting scared and slept with me in my bed all the time. One day as I sat working on my computer, and my daughter was playing outside with her cousins, I felt a hand rest on my shoulder.

I got a cold chill and turned around. I told the ghost to stop bothering me while I was working. By now, I was aware that we had a male ghost living with us.

I went back to working and I felt that same hand stroke my hair. Again, I told him to go away while I was working. He left. I had accepted the fact that he was here to stay.

Finally, one cold weekend night while my daughter was staying with her father, I finally came face to face with our ghost.

I was having a visitor over. We got into a terrible fight and he left. He soon returned very drunk. I told him to leave, instead he fell asleep on my living-room floor. I locked up the house and went to bed.

About ten minutes later I heard the doorknob turning. I sat up in bed and yelled out for my friend to go away. I thought he was trying to come in my room.

The door opened and there stood a man with long hair. The bathroom night light was on behind him so he was a silhouette. He was medium height and a bit muscular. He just stared at me. Because it was so dark, I couldn’t see his face.

I thought it was my friend for a second and so I yelled at him to get out. He turned and walked to the other side of my bed. I thought, the nerve of this guy. He then fell on the floor with a loud thump.

I got out of bed, turned on the light and ran over to the side of the bed to kick him. When I reached that side of the bed, it was empty. There was nobody there.

I just stood there staring at an empty floor. A minute later I ran out to living room and saw my friend asleep and snoring like a pig. I knew I had finally seen my ghost.

I started investigating my house. My neighbor told me that the house used to be a Meth lab and that a long history of bad people had come in and out of there. One of the regulars was a biker with long dark hair.

He came up one weekend and some shots were heard inside my house. The man never left the property. The owner who lived there rented a backhoe. Late at night he started digging in the yard.

The neighbor asked him what he was doing and he told him to mind his own business. The neighbor called the police. They came and told him to stop operating the equipment late at night and that was it.

Soon after, the owner was busted for running a Meth lab and went to prison. The biker was never seen by his friends again. The property was sold twice before I moved in and rented it.

I don’t know what will happen to that property. It is pretty run down now and the bank owns it. Maybe one day they will tear down the place and unearth the remains of that poor young man. To this day, I believe he was showing me where the accident happened and how.

I think he wanted to tell me that he meant no harm but he was just trying to get some attention. Whatever the case, I have no proof that he is buried there, so I can’t do anything about it. But I hope he is found one day so he can have a proper burial. May he rest in peace.