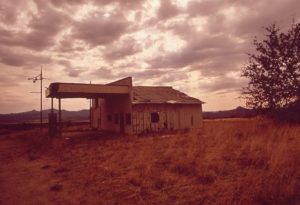 In his later years, Emmy Award winning actor Telly Savalas said there were only three events in his life that truly haunted him. The first occurred when Savalas was a young man working as a lifeguard. Savalas saw a swimmer struggling in the surf and attempted to rescue him, he was unsuccessful and the man drown. Even Savalas was not sure of exactly when his second haunting event occurred. He often stated that it was sometime in the late 1950’s.

However, judging from known facts in the story, it most likely happened shortly after 2:00am on Tuesday, June 28th, 1955.

Savalas had been on a date and was driving towards his home on Long Island when he ran out of gas. There were no gas stations in sight, so Telly went into a White Castle to ask for directions. He was told to go through a small wooded area which led to the Island Parkway, there he would find an “open 24 hours” gas station.

As Savalas left the White Castle, he heard someone with a very high voice say, “I’ll give you a ride.” As he turned, he saw a man in a white suit sitting in a Cadillac. Savalas quickly accepted the offer and the two men drove off.

The man in the white suit driving the Cadillac turned out to be James Cullen. There was little conversation between Telly and Cullen and in a couple of minutes they arrived at the gas station. Without saying a word, Cullen offered Savalas money to pay for the gas.

He hadn’t said anything, but Telly was broke and accepted the money. Savalas then asked the man in the white suit to write down his address so he could repay him. Cullen said that wouldn’t be necessary, but, at Telly’s insistence, he wrote down the information.

With a can full of gas, the Cadillac drove back to where Savalas’ car was parked along the road. As Telly fueled his car Cullen said “I know Harry Agannis.” Savalas didn’t know who Harry Agannis was, Cullen Told him he was a utility outfielder for the Boston Red Sox.

It seemed like an odd statement, the two men had talked little since they met and nothing had been said about baseball. After thanking the man, Telly got into his car and began to drive away. As he looked back Savalas was shocked to see no sign of James Cullen or the Cadillac.

Savalas made it home, thinking the meeting with the man in the white suit was rather strange, even more so when he got up for work and saw the newspaper. Boston Red Sox player Harry Agannis had died the day before at the age of 26. The newspaper story reminded Telly of Cullen’s statement, “I know Harry Agannis,” and the fact that he needed to repay the money Cullen had given him for gas.