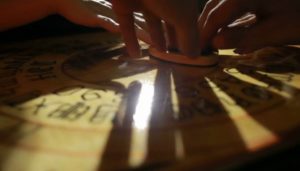 Back in the early 1840′s a house in Hydesville, NY, was believed to be haunted. Neighbors told the story of a peddler who had been murdered in the home and then buried in the basement. It was all just a bit of local legend, or was it?

The story of the peddler goes as follows. A maid working in the Hydesville home befriended a peddler who was selling household goods. The maid took the peddler to her employer’s home where he reportedly stayed for some time, evidently a welcome guest of the homeowners.

Then one day the maid, who had worked for the family for many years, was suddenly fired with no explanation.

Her term of unemployment however would be short as the family called her back after just a week. Though still puzzled by her sudden firing, the maid quickly accepted the offer and returned to work. All appeared to be normal and she quickly got back into her daily routine of cleaning and cooking. There was one change however, the peddler was gone, perhaps he had moved on looking for new sales.

She really didn’t give the matter a great deal of thought. What she did think was somewhat odd, was that the family appeared to have purchased all the goods that the peddler had to sell, every last item. Before long rumors began to circulate that the peddler had been murdered, buried in the basement and now haunted the home.

The story probably have remained just a local legend had not a new family moved into the home, the Fox family. The family included three daughters, Leah the oldest, Margaret (Maggie) age 15, and Kate age 12. The haunting of the Fox family began in 1848, when Leah and Maggie reported hearing clicking sounds. Before long the girls claimed to be able to communicate with the clicking spirit.

By making their own clicking sounds, clapping and just verbal commands the two, now joined by older sister Leah, claimed to be in communication with a spirit called “Mr. Splitfoot.” The Fox sisters amazing abilities of spirit communication made them celebrities, with Leah running the business side of things and her younger sister’s performing the demonstrations. The Fox sisters continued to claim to be able to communicate with the dead for many years and they were key to the creation of a new religion, Spiritualism.

At one point the sisters told of how, in search of the truth behind the murdered peddler, they searched for previous owners of the home. What they found was a family named Bell. The claim was that it was in fact the Bell’s who had killed the peddler and buried him in the basement. The girls also claimed that the peddler was a man named Charles B. Rosma. There was never any proof that any of this was true.

In 1888, Some forty years after the Fox sisters first claimed to be able to talk to the dead, Maggie made a confession, the whole thing was a hoax. There was no peddler buried in the basement, they couldn’t communicate with spirits of the dead, they made it all up.

About a year later Maggie tried to recant her confession but the damage had been done. Less than five years after Maggie’s confession the Fox sisters would be dead, after living in abject poverty at the end. Despite the confession, Spiritualism continues to this day.