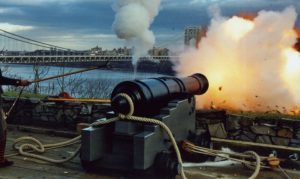 If a person dreams that he will die in a certain situation and then takes care to avoid that situation, we have, of course, no means of knowing if the warning was false or if fate has been cheated.

Sometimes, though, fate gives a warning and then refuses to be cheated. One night in July 1750 Robert Morris Sr., the father of the Robert Morris who managed the financial affairs of the American Revolution, dreamed he would be killed by cannon fire from a naval ship he was to visit.

The dream made him so nervous that he was persuaded to board the vessel only by the Captains promise that no guns would be fired until he was safely back on land.

The visit was made, and at its conclusion the Captain gave instructions that no salute be fired until he signaled that the rowboat had returned Morris safely to shore.

But while the boat was still within range of the ships guns, a fly settled on the captains nose and he thoughtlessly raised his hand to brush it away.

This gesture was taken as a sign that the salute should be fired, and so it was. A fragment of the blast struck Morris and wounded him fatally.

“Journal of the American Society for Psychial Research”, April 1970, p.193