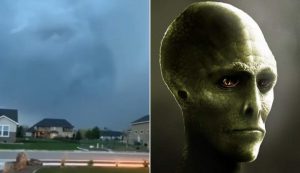 The following video was taken on April 28 of this year by David Taylor and his wife, living in the United States.

An elderly couple watched the storm in the evening when they suddenly noticed something strange in the overcast sky. There among the flashes of lightning a huge silhouette was formed, suspiciously similar to a humanoid head.

Taylors, being devout people, considered that a religious sign had appeared to them, and even considered the face of Jesus Christ in these outlines.

Nevertheless, when this video hit the Internet, many Web users immediately concluded that the “head” didn’t resemble the Savior at all, but a reptilian – a representative of a legendary extraterrestrial race.

On intriguing video, you can perfectly see the knobby forehead, looking upwards with a characteristic pupil, long bulging eyebrows, a thick nose bridge, a large flat nose and angry lips of a reptiloid humanoid.

However, all these impressive details do not prevent skeptics from confidently speaking about pareidolia.

According to the doubters, we are talking only about a bizarre cloud in which the brain of the observer instinctively recognizes a familiar image. In this case – a humanoid creature.

Guard let the ghost of a deceased patient into the hospice, thinking it was a living person