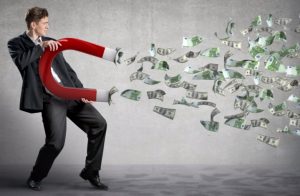 Ask most people about a topic of concern and money usually comes up in the conversation. What is it about money? During good economic times and bad we either worry about not having enough, how to make more or how to hold onto it. So let’s take a look at money from a spiritual or metaphysical perspective.

When you really stop and think about it, money is just bits of paper and metal coins. Even money as credit is just a bunch of numbers entered into a computer somewhere. You can’t eat or clothe yourself with paper notes, coinage or numbers. So where is the value?

The value is in what you can do with it. It is the potential contained within the money that makes it precious. So basically money is a tool or representation of those things you want and need. It simply serves as a proxy for the energy of manifestation.

Most everyone has money worries. Fears around the economy, job losses, outsourcing, insolvent banks and rogue markets have people on edge about money. But what it the true fear? Not having enough paper notes? Of course not, it’s about being unable to provide for our needs. The concern is over the energy of manifestation.

Here is a good time to bring up the law of attraction. Essentially it says that like attracts like. So if fearful thoughts play over and over in our minds about having less money, what happens? We get more of the same. Focus on lack of money and you will manifest that.

Instead put your attention into achieving your goals and meeting your needs. It takes effort and practice to turn those negative thoughts around, but it can be done. Obviously we cannot be in a state of denial regarding the outside world, but you can control what happens in your inner world.

Considering the rampant greed in our society, is it wrong to want more money? Somehow when we talk about spirituality it seems like we shouldn’t mention money. It’s as if the two are worlds apart and will never meet. However, let’s try to reframe this concept. If more money was available to you, think about how it would be used. For example, if you purchased new furniture, you would help the salesperson earn a commission thus providing for his or her family. You would also be helping the people who designed, constructed and delivered the furniture and so on. Furthermore you might donate your old furniture to someone who could benefit. This is the energy of money in action. More money can mean more potential for more people. That can be a good thing.

The opposite also holds true. The energy of money can also be misused. Wanting more at the expense of others, hoarding and possessiveness is the negative aspect. Usually this goes back to underlying fears of lack. Examining your intent and reasons for seeking more money is important. Look to your higher self for the answers.

Recalling that money is a proxy for energy, what can we do to get it flowing for ourselves and others? The key is to get the energy moving along with help from the universe. There’s a saying about “priming the pump.” Originally it meant shooting some water into a pump to remove air blockages so that it would work again.

Priming the money pump means making a gesture to the universe indicating that you are serious about your intent. Making a small investment shows that you are ready for more.

Let’s go back to the furniture example for “priming the pump.” Suppose you want money for a new dining room set, but don’t have it right now. Keep your intent focused on the big item, but go out and purchase a smaller related item like placemats.

Use the placemats for now, trusting that you will eventually be using them with your new furniture. By doing this you are sending a signal to the universe that you are ready and serious about bringing in energy for this goal. Be an active participant!

Although money can often be a worry and a struggle, do your best to put some trust in the universe. The universe is abundant and speaks in terms of energy rather than dollars and cents. On some level it will provide us with what we need. Trust and be open to its wisdom.