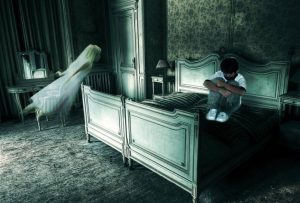 My encounter occurred in a reputable hotel in the quiet town of Hay-on-Wye, located on the border of England and Wales.

This sleepy town is famous for its countless bookshops, however because it is located so close to the English/Welsh border and has provided an idyllic setting for countless historic battles over the centuries, you will appreciate that the likelihood of this town boasting a ghost or two is high!

The particular hotel I stayed in was owned and managed at the time by the parents of a friend. I had heard on numerous occasions about my friend’s parents being visited by ghosts regularly. They were almost a common occurrence that they, the hotel staff and some guests had become accustomed to.

Despite these numerous sightings over the years, the proprietors were reluctant to promote the fact that the hotel was haunted for their own reasons. I was informed that the most sightings in this hotel occurred in Room 11, and it was there I was determined to spend a few nights.

Guests had previously complained of lights turning on by themselves, bed covers being removed, and locked doors being found wide open in the morning. I was not massively intrigued by such reports, they sounded very much in the vein of what one might consider ideal for a Hollywood storyline. I was much more intrigued by reports of Cromwell-esque soldiers seen marching through the walls of the cellar.

If Room 11 proved to be a non-event, I was very prepared to focus my attention on the cellar, but was prepared to investigate what Room 11 had to offer in the first instance.

My first night in Room 11 was completely uneventful. The room itself mirrored the creaky, antiquated history of the hotel, and was impressive with its low ceilings, massive beams and warped plastered walls. Having been allowed unlimited free access to the hotel bar by my friend’s father, it is fair to say that my sleep that night was indeed a deep one.

Quite frankly, the room could have been full of every ghost imaginable, poltergeists could well have chosen to do their worst that night and I would have been none the wiser! When I awoke the next morning, nothing suggested that I had had any deceased visitors during the night. In fact, the sunlight coming through the windows suggested quite the contrary.

My second night, however, proved much more interesting.

Given that my second stay in the hotel was on a Saturday night and the hotel was noticeably busier than the previous evening, I recall thinking that the overall atmosphere probably didn’t provide the setting a ghost would prefer to make an appearance in.

I was therefore happy to relax in the hotel bar along with other guests and public customers and stumbled wearily to Room 11 just after midnight. By this time, the hotel was clearly winding down for the night.

I was awoken later by an intense feeling of cold. The numbers on the digital clock next to me illuminated a section of the room a dull red and confirmed the time was 2:30am. It was apparent that the coldness I was feeling was not similar to that you would feel from an open window or a draft.

I recall a similar feeling of coldness on my face walking through a supermarket’s frozen meat aisle. It clung to me. I could almost see it. I lay still for a long time, but not out of fear. I felt more excited than scared. This unnatural cold I was experiencing suggested that my stay at this reputably haunted hotel was not going to be an uneventful one. The adrenaline rushing through my body also suggested that I was not going to sleep for some time yet, so I chose to lie still and watch whatever transpired.

Very little happened for what seemed like a very long time. At times, I was certain the coldness had a motion to it, like a repetitive swirl, although I could see nothing. But it remained, and constantly staring into darkness was making me drowsy despite a ghostly encounter still being a possibility.

The time was now 3:15 am, not even an hour had passed since I awoke. I decided that I would try to sleep and hoped that the next time I was disturbed, it would be to witness some poltergeist activity or at least an apparition of some sort! I awoke just in time for the last plate of breakfast, at 9:15.

Much of my final day was spent exploring the town of Hay, but my thoughts were constantly on my experience of the previous night. Sunday afternoon was spent in discussion with my friend’s family about their ghostly experiences. I was told that the hotel generally experienced some sort of paranormal activity almost every evening.

This activity ranged from the unnatural coldness I had felt, through to ghostly apparitions so lifelike that many guests had been both terrified and embarrassed to have actually said “Hello” or “Good morning” to these nocturnal visitors. I was again told that Room 11 was the best place to be should one wish to have such an experience.

My final night in the room was not disappointing.

I was awoken again, this time at 2:00 am. I was again aware of the coldness in the room, but was positive that on this occasion the cold was accompanied by a smell, a distinctive scent. The smell was soapy, like a faint perfume. At other times, I thought it smelt more like flowers but it was there nonetheless and it was definitely not there when I went to bed earlier.

The coldness WAS moving. It was more noticeable on this occasion that the previous night. Before, I had sensed the coldness was moving very slowly but in circular motions, almost as if it was trying to assess me, sounding me out. This time, the swirling cold was moving faster, as if it was trying to accelerate the arrival of something (or someone!).

I recall thinking that maybe this was a different cold, perhaps more than one this time. Perhaps also, it WAS the coldness I experienced last night but it felt comfortable with my presence to be able to behave in a way that it might have wanted to do previously. All these thoughts were going through my head. Then I noticed it, a mist swirling between the door and a window on an adjacent wall.

This was not an illusion or trick of the light. What I was seeing was definitely there. This mist was not fog-like though. It swirled, as if trying to create a form for itself, and looked more like the vapour given by dry ice than a moisture-based mist or smoke. It had weight, mass. It didn’t swirl outside of agreed boundaries it had set for itself yet it was moving toward the wall on the other side of the room.

The mist gave the appearance of hovering about four feet from the floor, but I became aware that the limited light coming in through the window was dictating how much of it I was able to see. The mist appeared to be a few feet off the floor but because the first foot was in darkness I was unable to see if the mist did actually touch the floor. The coldness prevailed as did the flowery smell, and the mist continued to move toward the wall opposite where it disappeared on contact.

Whether the mist only went as far as the wall before dissipating or if it actually passed through the wall into the corridor, I will never know. The coldness and smell were not as strong but perhaps I had become accustomed to them.

The rest of the evening was completely uneventful although I did not sleep for the remainder of the night. I lay awake, watching the darkness turn to a royal blue then sunlight, in awe of the rare and amazing spectacle I had witnessed.

I left the next morning and chose not to tell my friends, his parents or the hotel staff of my experience for a number of reasons. In fact, the above testament is the first time I have told anybody.

I would recommend visiting the town of Hay-on-Wye in any case, but if it is ghosts you want, there aren’t many hotels in the town. You should find the one I stayed in without too much difficulty. Remember to ask for Room 11.

Alternatively, the cellar could provide the venue for a very interesting evening. Should I return to hotel, I would most certainly investigate what it has to offer.