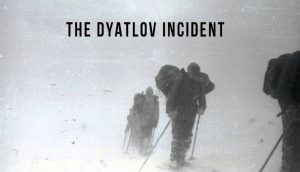 In January 1959, ten healthy athletic cross country skiers began on their camping trip in Russia’s Ural Mountains. They settled their camp on the edge of the mountain, Kholat Syakhl, a name which means “Mountain of the Dead”.

Only one of the group members returned alive. Those that didn’t make it back were found mostly naked and shoeless almost a mile from their camp, their bones broken from crushing, one’s tongue was missing, and what little clothes they had were highly radioactive. Welcome to Dyatlov Pass…

“If I had a chance to ask God just one question, it would be, ‘What really happened to my friends that night?’” Those are the words of the lone survivor Yury Yudin who was forced to turn back due to sickness before the group reached their camp.

When the group did not return one month after they began their hike search crews, including planes and helicopters were sent out to find them. Two weeks later they located their camp, but the scene was the cause of serious concern amongst the rescue party.

Their tents had been torn open by hand from the inside, all of the equipment was still present, and bare footed tracks led off into the woods. The first two bodies were found almost 630 meters from one another, partially naked but with no injuries other than a small fracture to one of their skulls.

The cause of death was easily determined as hypothermia, but this still offered no explanation as to why they had left the camp in such a state.

Upon discovering the remaining bodies it was ruled that they did not die of natural causes. Each had multiple broken bones caused by a crushing force as strong as a car collision, according to Dr. Boris Vozrozhdenny, the attending doctor on the scene.

He went on to add that due to a lack of external wounds on the bodies, the broken bones were mostly likely caused by a sudden massive increase in pressure, much like being deep under the ocean…and then there was the body of Ludmila Dubinina, whose tongue had been surgically removed. They never found the tongue.

Many authorities later stated that the initial investigation was flawed, noting that questions regarding the presence of radioactive contamination was almost entirely ignored. Witnesses of the bodies point to a dark brown tanning on the skin of all the victims.

The source of the radiation was never officially looked for, but most importantly, a large amount of small scraps of metal was found all across the search area. This too was not included in the official report.

Eight years after participating in the search, journalist and photographer, Yuri Yarovoi published his book “Высшей категории трудности” (Of the Highest Rank of Complexity) after having numerous manuscripts rejected due to government censorship.

Since his death in 1980, every single piece of writing, including his diaries have vanished. No manuscripts or photographs are still known of. We will probably never know what really happened on Dyatlov Pass, except that it was not something we know of anywhere else.