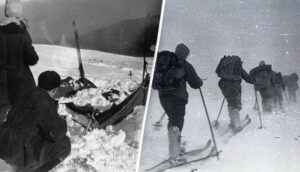 In January 1955, a group of ten students and graduates of the Ural Polytechnical Institute set out on a ski trek in the Northern Ural Mountains.

All of them were experienced mountaineers who consistently went on skiing expeditions.

In order to reach their destination, Otorten Mountain, they needed to cross the Dyatlov Pass. Named after the leader of the group, Igor Dyatlov, the pass is located between Otorten Mountain and Kholat Syakhl — “Dead Mountain” in the native Mansi language.

On January 28, one of the ten students fell ill and remained behind. The remaining nine members arranged to notify their sports club via telegram once their ski trek ended, in about two weeks’ time.

By February 20, it became obvious that something went wrong and the students’ relatives demanded a search and rescue operation. On February 26, rescuers found the group’s abandoned and damaged tent, half covered by snow. Strangely enough, it had been cut from the inside and contained the group’s clothes and shoes.

In the snow were at least eight sets of footprints, leading toward the edge of nearby woods. The footprints were left by people wearing only socks, one shoe or even barefoot. The discovery baffled the rescue team but more questions would soon be raised. 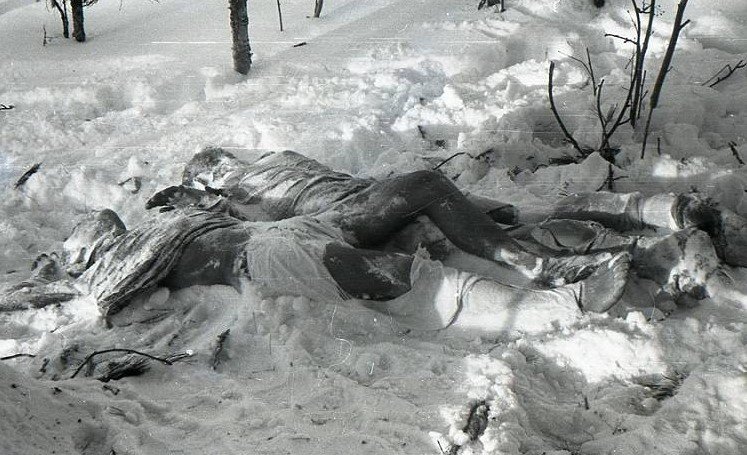 They followed the tracks and at the edge of the forest, under a large cedar tree, they found the remains of a fire and the bodies of two men, Krivonischenko and Doroshenko. The only piece of clothing they had on was their underwear.

They had burns on their hands, legs and hair. The tree had snapped branches up to a height of 16 feet, suggesting that someone from the group had tried to climb it. Some of the high branches from nearby trees were burned.

Between the campsite and the forest, the rescuers found another three bodies, those of Dyatlov, Slobodin and Kolmogorova. Their poses suggested they were returning to their camp. There was no evidence of a struggle and no other tracks were found in the snow.

As the search for the remaining four members of the group continued, a forensic investigation was performed on the five bodies already found. The cause of death was determined to be hypothermia.

The discovery of the other four bodies was made possible by the spring thawing. On May 4th, the missing corpses were found in a ravine not far from the woods, buried under 12 feet of snow. Unlike their friends, they were clothed and their cause of death was brutal internal injury.

Their chests were crushed inward, they had shattered ribs and massive internal damage. There were no signs as to what might have caused their injuries and bizarrely, their corpses showed no signs of bruising.

The medical examiner, Doctor Boris Vozrozhdeny said that the force capable of inflicting this kind of damage far exceeded that of a man and he likened the damage to that of a car crash.

The body of Liudmila Dubinina had even more damage as she was missing her tongue, eyes, part of her lips and facial tissue. It was claimed that she had been found face-down in a stream and this was due to decomposition in a wet environment but photographs show her body kneeling against a large boulder, away from running water.

Three pieces of clothing showed higher than normal levels of radioactivity. Family members also pointed out that the young hikers’ skins had taken on a strange orange hue.

After recovering journals and film reels from the tent, investigators found out that the group had erected their tent on the slope of Kholat-Syakhl on February 2, sometime around 5:00 PM, in an attempt to dodge the bad weather.

Two hours later, they had what would be their last meal and began settling for the night. The incident that led to their demises started somewhere between 9:30 and 11:30 PM. Something must have frightened the skiers so bad that they ripped the tent from the inside and ran into the frigid night mostly unclothed. The footprints suggested that the group dispersed but later regrouped near the cedar tree.

There, the first two members died of hypothermia and the remaining scavenged their clothes. Dyatlov, Slobodin and Kolmogorova decided to overcome their fear and try to return to the tent but died on the way. The remaining four sustained their injuries closer to the forest and ended up in the ravine in which their bodies were found.

The baffling nature of this case rests with the many aspects that contradict conventional scenarios. The number one question was what could have caused nine seasoned mountaineers to leave their tent, fully knowing that the temperatures outside were around 20-30 degrees Celsius below freezing?

At first, investigators were inclined to point responsibility for the 9 deaths to the local Mansi people. However, there was no evidence to support this theory; the bodies had no bullet wounds, their provisions were left untouched and the injuries they had sustained couldn’t have been caused by humans.

It wasn’t long before someone suggested an alien attack. According to reports filed by Lev Ivanov, the lead investigator at the time, another group of hikers who camped 30 miles south had seen strange orange spheres in the northern skies.

In the following period, similar anomalies were reported by residents of the area around Dead Mountain. Supporters of the alien attack scenario point out the unexplained increased levels of radiation, the hikers’ skin turning orange and Dubinina missing her tongue.

Another theory in circulation is that the skiers had accidentally stumbled upon a secret soviet military experiment and had paid with their lives. One of the advocates of this theory is Yudin, the team member that had to remain behind.

He was asked to help identify the objects found at the site and among them were a pair of glasses and skis that did not belong to his colleagues. He also testified to seeing documents that proved the investigation had started two weeks prior to the “official discovery”.

In the fifty-five years since the incident many explanations have been suggested. Some say that the group fell victim to an attack from vicious Almas, the Siberian yetis.

No tracks belonging to beasts were found, however.

A theory involving naturally produced infrasound was put forward. Others have proposed more sensible explanations, such as avalanches or freak lightning due to the friction caused by the snowstorm. A book even suggests that some of the skiers were in fact KGB officers on a mission to deliver radioactive samples to a CIA cell stationed on the mountain.

No theory has managed to offer a full or satisfying explanation to this day. The official report stated that the hikers fell victim to a “compelling unknown force”.

In 1990, author Anatoly Guschin was granted special permission to study the original files and later reported that many pages were missing and an envelope mentioned in the evidence list was nowhere to be found.

As time went by, more and more layers have been added to a case that was bizarre from the very beginning and the secrecy of the official investigation contributed to the speculations even more.

To this day, the Dyatlov Incident remains one of the greatest unsolved mysteries of the 20th Century.