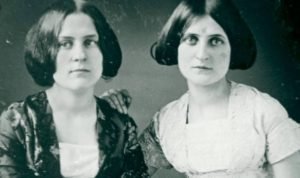 Like other new age movements, Spiritualism was a counterculture movement, democratic in nature, and devoid of a religious hierarchy or sacred books.The movement continues to exist today as evidenced by the number of individuals who believe in ghosts, the ability to contact those who have died, mediums and séances.

More than 60% of Americans surveyed admit to having consulted a psychic in an attempt to learn something about or communicate with a lost loved one. The percentage is actually believed to be higher than this as many are thought to be embarrassed to admitting to this practice.

The Popularity of the Spiritualist Movement

At its height in the 1870’s, more than 11 million of 44 million Americans affirmed membership in the Spiritualist Movement and it is believed many more also followed the movement though were hesitant to admit so. Ye,t while many may assume it was merely a reflection of the primitive education and superstition of the time, many academics, scientists, and well respected writers were counted among its members.

The mother of Abraham Lincoln organized séances to speak to her son after his death and Czar Alexander I abolished serfdom in Russia because of post-mortem instructions received from his dead father Emperor Nicholas I. In a case that caused sensation in its time, a medium claimed that Charles Dickens dictated him the rest of his unfinished novel Edwin Drood.

However, the manner in which the movement began was far from scientific, resulting in controversy and this caused many who might otherwise simply have ignored it to instead actively oppose it. The main factor continuing to create doubt and criticism yet which has remained at the center of the movement until today – The use of mediums to lead séances as the primary method of reaching those who have died.

The individuals who ultimately were credited with beginning the Spiritualist Movement who were also two of the most famous mediums of the day were the Fox Sisters.

Maggie and Katie Fox gained their notoriety after demonstrating for family and neighbors their ability to communicate with a ghost who allegedly haunted their house.

Preface to the Fox’s Fame

However, the story begins several years before the Fox Family moved into the house when a couple named the Bells lived there. As the story goes, one day a peddler arrived at the house selling various household goods such as pots, pans and cutlery.

Staying with the family for several days, it was rumored he may have carried on an inappropriate relationship with Mrs. Fox which came to the attention of their maid, Lucretia. While the peddler was still there, Lucretia, was suddenly fired by Mrs. Bell though with no hard feelings on either side.

She was unexpectedly summoned back to the Bell home several days later and, upon arriving, noticed the peddler had departed. She further noticed that the kitchen was filled with numerous items he’d been selling.

She found nothing suspicious in this, however, believing that Mrs. Bell had simply bought all the items from the peddler before he moved on. Everything seemed as before – however this feeling of normalcy would not last long.

Strange Sounds Begin to be Heard

Soon after returning, Lucretia began to notice strange noises in the house; taps and knocks coming from the room the peddler had slept in or footsteps descending the stairs which led to the cellar long after everyone was in bed. Understandably frightened, Lucrecia asked her brother or friends to come stay with her when left alone in the house.

Usually, when others were present the noises would cease, but on one occasion when her brother was there, the sounds went on for hours, scaring him so badly he refused to return. A few days later, when Lucretia was in the cella,r she tripped over a patch of what seemed to be newly turned earth piled against one of the walls.

When Mr. Bell discovered that Lucreia was hurt and how she’d been injured, he quickly explained that the dirt had been dumped down there to cover rat holes then changed the subject. As the sounds grew in intensity, the Bell’s decided they’d had enough and moved out.

Shortly after, the Bell family moved out and the Weekman family moved in along with a relative, Mrs. Lafe. They were not to live there long, either.

The strange occurrences began when Mrs. Lafe was in the kitchen and spotted an apparition in a long black frockcoat, a box hanging from one hand. She screamed and it reportedly disappeared.

Soon the whole family was hearing noises throughout the house similar to those the Bell’s had heard; knockings, rapping, and ghostly footsteps. The sounds soon proved too much for them and the family abandoned the house so quickly, they failed to take even some of their most treasured possessions.

Next to live in the house were the Fox’s, a couple with two young daughters still living with the family. Before long, the daughters began to run to their parents in fear after bedtime, claiming to have heard someone knocking, and the oldest of the two, Maggie, stated she had felt a cold hand touch her face. Believing this to be no more than the over active imagination of young girls, the parents dismissed their daughters fears until they too began to hear the noises.

The girls began to realize that every time their father knocked on a wall trying to locate the source of the sounds, the same number of knocks was heard from behind the wall.

One of the girls decided to test this and naming the spirit Mr. Splitfoot commanded in a loud voice, “Mr. Splitfoot – do as I do.” She clapped twice and two claps could be heard to follow. She knocked on the table and the same number of knocks could be heard when she stopped.

Not certain of what to do, the father invited several neighbors to the house each evening and one of these devised a system of knocks that represented the alphabet and the words yes and no.

Soon, utilizing this system, it was determined that the spirit was that of the peddler who had stayed with the Bell’s, ending up being brutally murdered and robbed of his wares.

One of the neighbors present that night was Lucretia, the Bell’s former maid, who gave credence to the story the neighbor had discovered from the ghostly presence.

During the following weeks the manifestations grew until Mr. Fox decided, despite the fame of the house’s ghost known to respond to some who addressed it, to move the family to the home of a married son.

The Beginning of the Fox Sisters Controversial Calling

The distance from their original home did not dampen discussion of Maggie and Katie’s unusual talents. Soon, word of the sisters abilities to communicate with the spirit in their former home spread and many came to see demonstrations of these talents.

It appeared that though nothing unusual had been observed or heard in their brother’s house, they were none-the-less able to call forth spirits from beyond.

It quickly spread that the sisters had the special powers of Mediums allowing them to communicate with the dead, and that they did so in a previously unknown manner – whatever they heard was also heard by all those present.

Prior to this, mediums often closed their eyes and allegedly spoke with the spirit they’d called forth relaying the messages received to the relative at the table, though no one else heard a voice.

The mania to communicate with the dead gained speed and the Spiritualist movement was born, its beginnings ushered in by two unlikely founders. The Fox Sisters began giving public performances of their abilities and held séances which such luminaries as Harriet Beecher Stowe attended.

The Beginning of the End

The Fox’s “abilities” were subsequently determined to be fraudulent prior to their deaths, largely due to one of the sisters becoming inebriated one evening and admitting the cracks heard by séance participants supposedly signaling the presence of a spirit were actually created by their ability to crack their toes.

She gave away the secrets of other effects they produced to convince séance participants that spirits were among them and word quickly spread. However, while admitting to some “extras” added to ensure the individual whom the spirit was addressing was paying attention, the sisters vehemently denied that they faked everything and asserted they really were able to call forth spirits from the afterworld.

While credited with beginning the Spiritualist Movement which became an influential force beginning in the late 1800s and even continuing in some circles today, history has dismissed the Fox Sisters as charlatans.

However, their popularity began to decrease along with requests for their services though some did remain loyal despite the bad press.

Talented Mediums After all?

An interesting occurrence called this conclusion into question, however. It appears that in 1904, long after the Fox family home had been left abandoned, some children were playing in the cellar, when one of the walls collapsed almost killing one of them.

A man heard the screams and came to their rescue. After taking care of them and ensuring they would be looked after by a medical professional who removed them from the house, the man returned to the cellar to examine the collapsed wall.

He discovered that it actually wasn’t a wall, but a false partition, quickly and poorly built some time before. Upon further inspection, the man found between the false brick wall and the real cellar wall the bones of a man next to a large tin peddlers box. After asking around, he found an elderly man who remembered both the Bell’s and the Fox’s from when each family had lived there.

After listening to the man’s story and asking for details about the box, the elder informed the man that the box sounded exactly like the one the peddler had carried with him, seen by almost all in the neighborhood at the time, as the peddler went from house to house attempting to sell his wares.

A few others who lived there when the peddler was with the Foxs’ returned to the dilapidated house with the man and examined the box. They all agreed it was the same box they’d remembered the peddler carrying. However, while one person stated to her knowledge he hadn’t sold almost anything, when the box was opened, upon inspection, it was found to be practically empty.

While other stories suggest the Fox Sisters were indeed charlatans, the question of whether they truly had mediumistic talents which they augmented with fake effects remains. The discovery of the body which was determined by officials to belong to that of the peddler who was believed to have been murdered and his wares stolen, only strengthens the query.

The Story of Dorothy Eady: Most Convincing Evidence for Reincarnation